A rare whale skeleton was discovered in Thailand

Is our brain a holographic device?

The fire engulfed the history of California's oldest park

"Of all the unexplored assumptions and criteria by which we measure our everyday human lives on planet Earth, the largest and deeply undisputed tool and institution known as the Gregorian Calendar."

What is commonly said

“Time between 5. October to 14. October 1582 has been deleted. Of course not literally; only in the calendar. These ten days declared Pope Gregory XIII to be non-existent in adjusting the Julian calendar established by Julius Caesar in 46 BC Around 1575, the Julian 10 calendar was found to be behind the seasons. For example, Easter started later than it should and eventually moved to summer. The deviation in the calendar was due to the fact that the solar year (the time the Earth once orbits the Sun) is 11 minutes shorter than the entire Julian calendar. To be precise, the solar year is actually long 365 days, 5 hours, 48 minutes and 46 seconds.

Pope Gregory saved the situation (and the seasons) by appointing a committee to solve the problem. It took five years, but eventually the group, led by physician Aloysius Lilia and astronomer Christoph Clavio, proposed to abolish the three leap years every 400 years to keep the calendar accurate. Upon transition to the Gregorian calendar, 10 days were officially declared nonexistent and 4. October 1582 was declared 15. October. Today, the Gregorian calendar, introduced for the first time in Italy, Spain and Portugal, is the most widely used system in the world.

Let's examine the other side of this story based on how Jose Arguelles puts it in the Summary of Critique of the Gregorian Calendar:

“Calendar is a control tool. The two most important calendar reforms in history were the Julian reform of the calendar from 46-45 BC and its successor, Gregorian, from 1582 BC The motives of Julius Caesar were clearly linked to his personal ambitions and the conversion of Rome from the Republic to the Empire. Julius Caesar's calendar ensured the Emperor's domination. The way the empires used the Julian and later Gregorian calendars persisted as a tool of control that is now inextricably linked to how history has been going on. “The year of confusion‟ (46 BC) about 445 days, which was part of the Julian reform, completely equaled the second major reform, Gregorian, in which ten days were between 5.-14. October "lost forever," to make a calendar
could "flatten" with the sun. And while Catholic countries in Europe adopted the reform without difficulty, the Protestant reluctantly agreed. Across the Americas, however, the Julian calendar was introduced as an instrument of power and a symbol of domination over the indigenous peoples that humiliated the Europeans, including the Mayans, Incas, and Aztecs - who all used, besides other calendars, the thirteen-month / 28 daily counting.

As for Julius Caesar, there was a politically appropriate moment for Gregory XIII to reform, but this time around the world, to present itself as a way of expressing and expanding power and domination. As European power spread around the world, nations that have had their own time-counting systems have adopted the Gregorian (Julian) calendar and solar year system as part of an 'international policy'. This completely ensured the West's domination of every aspect of life around the world - until the "Inevitable Moment" [11.9.2001].

Not surprisingly, since his birth in the imperialist ego of Julius Caesar up to the well-timed "reform" of Pope Gregory XIII, this calendar, "despite his strange historical puns and loops he caused," (Duncan, Calendar, p. 289) , the standard of global civilization. Given the irregularity of the Julian-Gregorian calendar and the pursuit of the accuracy of astronomical time, history would have to be nothing more than a set of strange puns and twists, while global civilization as such represents a triumph of artificial time over the world of nature. Only a species whose perception of time was captured by artificial measuring instruments could become so outraged that it created a monstrous gearing known as the "fast world," civilization, where money and technological progress outweighed human sensitivity and natural order. 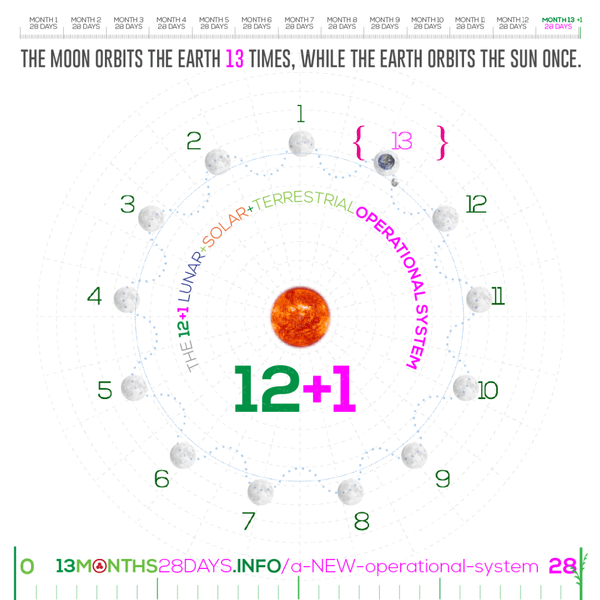 All efforts to reform the calendar must now focus on rectifying this destructive course. In the light of this criticism, it is advisable to present the introductory part of the United Manifesto from the Advocates of Calendar Reform, which was first published in 1914 at the beginning of World War I - approximately 90 years before the major calendar change in 2004. As can be seen, the problems of irregularity that prompted reform are still a problem today. However, the consequences of not tackling these problems have only increased and become increasingly complex, leading to the chaos of the world fighting terrorism. This is the result of a mistake that has not been corrected over time - it has just become more entrenched and transforms into a dogmatic and hopelessly contradictory thinking of everyday thinking and life.

“So we, the signers here, have been interested for some time in reforming and simplifying the calendar currently used by Western Europe, America and other countries with a view to unifying quarters of the year, eliminating irregularities in months and establishing a lasting relationship between week and days of the month, supporting one or more of the proposals that have been put forward to implement these reforms; and therefore said proposals generally support the introduction of a year on 365 days and a leap year on 366 days without a weekly or monthly calculation; and therefore we found that certain circles - both ecclesiastical and scientific - were raised, perhaps sentimental, but arguably defended, with objections to the introduction and establishment of these means… Therefore, we decided to unite and recommend that simple arrangements for Julian and Gregorian calendar listed below…

If you have a distorted standard of measurement and hold it just because your parents have followed it, you have become a distorted person. A crooked man will walk a crooked way and build a crooked house. The problem of calendar reform is both logical and moral. Bad logic leads to bad morality. A mistake in time will destroy the mind. Apocalypse is a reward for poor timing system. To free yourself from the flames of your own apocalypse, change your calendar. There is no apocalypse in a harmonious world. It is of utmost importance that the knowledge of 13 moons movement be expanded as quickly as possible by the media and education across the planet and the Gregorian calendar rejected as soon as possible. Once mankind has been operating to the right time standard, it will have the ground ready to unite and accomplish the unreal and heroic task it is currently facing. More than any spiritual teaching is a gift of time.

"The architects‟ the artificial time matrix seems to be working very hard to strengthen the enslaving mechanism that has been working on this planet since the Spanish Inquisition:

“A Saudi civil servant will lose 11 days of salary after the country moves to the Gregorian calendar, which is the predominant format of time management in the West. This change is part of austerity measures designed to reduce the state budget deficit. 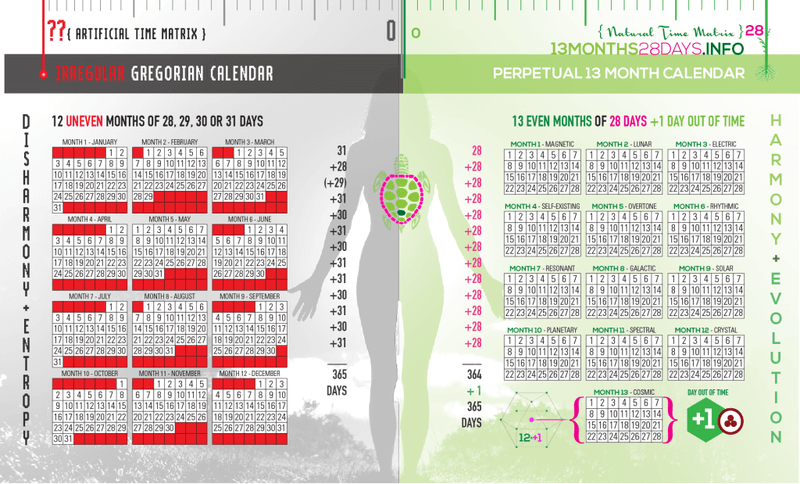 If you think you're free, but there's one single dogma that you haven't explored, let alone exorcised, how can you think you're free? But if this dogma were pointed out and you still wanted to free yourself, would you not do something about it? Or you would be lazy and say that there's nothing you can do about it. But what if you can do something about it? What if liberation from the enslavement of the mind meant that you had the power to stop time and possibly even atomic energy? Wouldn't you want that power?

"If the Julian / Gregorian calendar were presented as a new way of measuring time, we would immediately reject it, with its present knowledge and way of life, as something totally impractical, devoid of harmony and order, unbalanced and irregular, as a too cumbersome calendar to perform calculations, because its individual parts are not comparable. ‟

“A science or scientist who, without a doubt, abides by the Gregorian calendar, is in fact not worthy of this designation. What is science? We would answer that interest in the logic and accuracy of measurements, as well as measurement standards that make use of measurement unity according to what is being measured. Yes, the length of the year is calculated as 365,241299 of the day, but if the annual measurement standard used is irregular and unscientific, then it is useless and really distorts the mind by misleading it, which can only end in self-destruction. So striving for a true and accurate year is, by its very nature, an illusion that makes us blind to the true nature of time and distracts us from a true understanding of ourselves and our role and purpose here on Earth.

By introducing and replacing the calendar with a thirteen-month standard, it will return us to our original purpose and bring us back to the path of harmony and natural health. According to the Law of Time, the damage done during the period when mankind hesitated and lost the opportunity to change its time frequency was incalculable. The last opportunity to change the calendar and the time frequency is now approaching. For this reason, we must be absolutely clear and unshakable in our understanding and determination to reveal and eradicate the current civil calendar once and for all.

Looking at the loops and twists accompanying the history of the Gregorian calendar, we have to ask: why are we continuing to use this tool and what are the consequences? Is the calendar something more than a debt repayment planning tool (calendars), or is it a synchronization tool? The harmony or disharmony of time is deeply rooted in the time counting tools we use. There is no doubt that we live more in a time of chaos than harmony. As for the effects of the time measurement method on the human mind, we can say that the confusion over time stems from the calendar we use. If we want to leave the time of chaos and enter the time of harmony, we have to exchange the instrument into which the chaos is embedded, for an instrument that is the model of harmony itself: counting after 13 months / 28 days. This is the choice that humanity must make.

Did we have the tools used in the construction of ancient monuments right in front of our eyes?

Tuatha Dé Danann: shining beings who are said to once rule Ireland

7 spiritual symbols from antiquity - who is close to you?