Chile has published an official study of UFO photographs

This office, known as the Committee for the Study of Anomalous Airborne Phenomena (hereinafter referred to as CEFAA, transl.) is placed under surveillance Ministry of Civil Aviation (DGAC, no. transl.) that are similar to ours Federal Aviation Administration (in the US - FFA, no. transl.), under the jurisdiction of the Chilean Air Force. He is responsible for analyzing selected reports of unexplained aviation phenomena in the Chilean airspace, which he received mainly from pilots and aviation personnel.

UFO photographs were taken in the Collahuasi copper mine, at an altitude of more than 11 km, on the Andean plateau in the far north of Chile. Odd distance, low oxygen concentration and unusually clean sky make this area desolate and inhospitable. The Collahuasi mine produces copper concentrate, copper cathodes and molybdenum concentrate from three open mineral deposits.

In April, 2013 worked four engineers - professionals specializing in electricity, electronics, and liquids. They witnessed the circular shape approaching and hovered for about an hour in approximately 2 000 tracks and moved around in different positions. One technician shot the object with his Kenox camera Samsung S860. This strange object did not make any sound, and in the long run it faded east.

Witnesses decided not to tell anyone, due to the negative reactions they had with the observation of the UFO, and so they intended to keep these observations forever. However, a few months later, the photographer showed his pictures in the mine, and he wanted to make copies. The pictures were sent by CEFAA in February, and he also provided the agency with information that was told by a witness. He also wished to remain anonymous.

Chile's meteorological institute under DGAC confirmed that at that time it was a pure sky with no possibility of lenticular clouds. All other meteorological phenomena, which could be a possible explanation, were excluded by the Chilean officials. 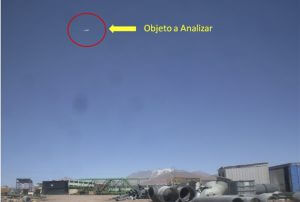 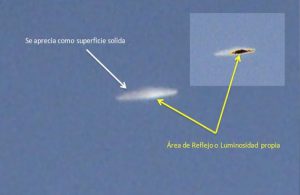 CEFAA staff told me that there were no drones near the mine. "People in this area know about drones," said Jose Lay, Director of National Affairs for CEFAA. "Fishing companies use drones and they are really making a lot of noise. This is definitely not a dron. "DGAC staff also excluded experimental aircraft, weather balloons and anything else that could explain the incident.

When all possible explanations were eliminated, CEFAA employees decided that the photographs were worth analyzing. The results of this study, led by leading CEFAA analyst at the Meteorological Office, were published by 3. July and can be viewed on the CEFAA website.

The report states that the witness described the phenomenon as a "flattened disc of dazzling color, with a diameter of 5 to 10 meters [16 to 32 stop]. He was showing climbs, descents, and movements on the horizon in short lengths, approximately 600 meters above ground. "Witnesses felt the object was controlled by some intelligent force.

The report states that the first image, enlarged and focused, shows a solid object that reflects the sun. It adds that an object can also emit its own energy due to the high temperature as seen in the picture (the black area in Figure 2). 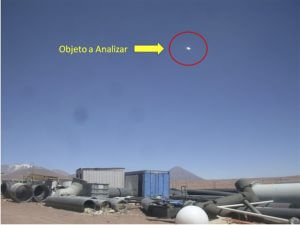 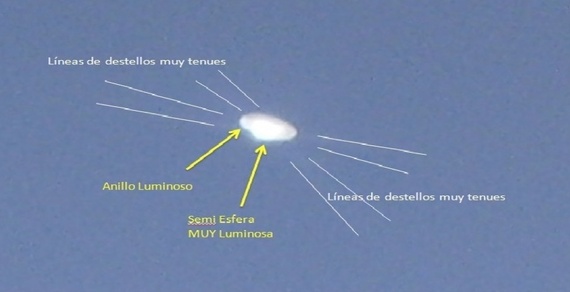 The second photo captures the object in the sky in a different position. (CEFAA does not know what is the time difference between the first and the second photos.)

The text on this second enlarged photo indicates lines where the very thin rays reflected from the "extremely light hemisphere". Analysts concluded that the object "radiated its own energy, which does not match the natural light that is reflected outside the object." At noon, the glow under the object could not have been caused by the sun that was reflected from the top.

The study concluded that "it is an object or phenomenon of great interest and can be qualified as a UFO."

Despite the convincing nature of this analysis, CEFAA employees have accepted the limitations of the Collahuasi case. "Witnesses were unwilling to cooperate," Jose Lay told me. "We tried to contact them, but we did not get any feedback. So we treated the material just as we did with several of the same or similar cases: we established them for future reference or comparative purposes. That's all we can do for this case. "

General Ricardo Bermudez, CEFAA CEO, now retiring, says, "We admit that this is the decision of only one CEFAA analyst among several. So we have to be careful. "Next week, he called for a meeting of the CEFAA Scientific Commission, which is made up of high-level lab specialists and universities.

Although they are not photo and video experts, the view of this famous group that supports CEFAA's work and assists with investigations when it comes to being able to shed light.

The media in South America showed great interest in these photos. In the United States, Bruce Maccabee, a naval scientist and well-known photo analyst, says: "The second figure seems to be a very clear shape of the hemisphere, blown down ... perhaps a UFO shrouded in a cloud of steam." He notes that additional data is needed to predict more, but it is clear that the object has traveled "considerable distance" between capturing the first and second photographs.

"This is not a purely normal thing that can be seen in the sky (bird, plane, cloud, etc.)" Maccabee in e-mail. "That makes either a real thing - UFO - or a Canadian joke, which does not look like, though the inability to question witnesses reduces credibility. This case is certainly worth exploring. "

It's really unfortunate that eyewitnesses were not willing to talk to authorities to make them anonymous. Still, these photos are important because they were studied by a government agency that has access to the relevant information needed for proper analysis. This is unusual in itself.

I commend CEFAA for taking a case like this one. Experts carried out serious investigations and then released public information and did not acknowledge any UFO existence, which is legitimate.