Sergeant Clifford Stone (2): Have you ever seen UFOs?

Pentagon: "It started with a call with one of my colleagues, I know his name was Jack. He worked in the army for the US Army Security Agency and then assigned to the National Security Agency, known as the NSA. He was offered to take me by car to my home military base, as he was supposed to be on the way.

So we went. On the way, we talked about different things - family, army, and the like. He then began talking about having an incident during which he had seen the UFO. And he started to squeeze me: "Have you ever seen UFOs?" And I said. "Oh, I saw things I could not identify."

You know, we tried to hold on to the wall, and he says, "Come on, you can tell me. We're buddies. " So I started to say a little more. Then he dropped me off at my unit and called me in a few weeks and said, "Hey, listen, you've never been to Washington DC, right? You have never seen the Pentagon and some other places that are worth seeing, which are usually visited by tourists. "
I replied, "No."
Continued: "So what if I sent a car to pick you up for you?"

Now think. He is a specialist of the 5 grade, that is, in the army, E-5 (sergeant, specialist of 2. That's the same as Sergeant E-5. The difference is that you are a specialist in your field without direct command authority.
It happened and he sent a service car for me. "Highly Unusual" I thought, but I did not think about it. Simply: "Hey, NSA - what do I know?"

Some car stopped with a driver at my unit and they take me for the weekend, supposedly gone somewhere. We went to Fort Virginia, led me to the building, and I say, "That's the headquarters of the NSA where we go." We went directly to Jack's office.

When we came in, Jack was not there. He had to go somewhere. He had the assignment he had to work on, but later he came, said one of the guys who were present. The guy, who was probably one of Jack's friends, suddenly says, "It is not a problem. Why not take you to the Pentagon ... because ... oh, I understand ... did you never visit the Pentagon? I could take you there, look at what's going on around the Pentagon, and get you there for a visit. "

He did so and handed me a badge. He says: "Keep this with you all the time." There was some picture on him. Then it was wearing different color sections indicating where I was authorized to go and where I was not allowed to go. And right at the bottom was something written: "This is very important, it opens all of your doors. Keep your "

We went to the Pentagon. When we got there, he did me and showed me some offices. At one point he pointed to one room and said, "Here, this room here is where 29. July 1952 held a press conference, dealing with the UFO, which at that time was reported to be over Washington, DC " 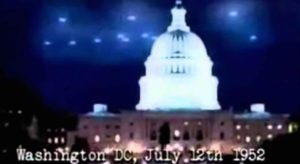 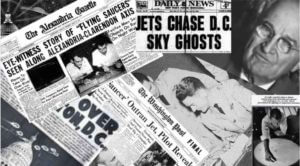 The incident was ruptured in all newspapers

To the pictures appendix: There is no evidence of UFO existence? So why did the Pentagon gentlemen deal with them, why did every newspaper on the opening pages write about them the next day, why do photos show objects right over the white house? Where else should images appear to take the existence of foreign entities seriously… Perhaps above Wenceslas? :)

And he says: "You know, at night 18. 1952 was registered 68 ETV in August? "
And I said, "Well, I know that very well."
Then he says: "You know, the most unlikely case - even if they get all the publicity - was that night at 19. on 20. July. It was absolutely unique. Most people do not know about it. " And he transferred the conversation to details.

Then we got into the elevator and suddenly said, "I'll show you a cellar under the Pentagon. People have never seen it. But we need to tighten security measures. " which in view of the risks of that time could have meant that they were building a building for a nuclear attack. "We need to tighten the Pentagon to make sure people inside survive the nuclear attack event."

So we went downstairs. When we got there, I had no idea how many of that were the floors. We went out and there was such a small silver "car." There was no way to say where it had an ancestor and where the butt and where in the direction were the seats. 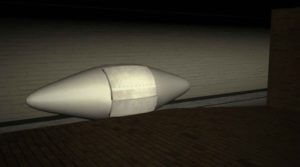 We have entered ,. The device resembled a shot and he says: "This is called a monorail, but it does not move on the track." Inside, he showed me an object resembling a small pipe that was probably supposed to be able to drive. It was said to be electromagnetically driven. We got in. I do not even know how long we went underground. But he tried to explain to me that the Pentagon is a great place. During the journey, he explained to me that I do not have to worry about the fact that this little device is not being driven, you just know where you are going ... but I'm sure there was a way to better control it, but I do not remember it.

I was surprised and fascinated because this was the first time I saw anything like this. We got to some place where the door was on the side. We stepped out and entered the door. There was a long corridor - no door, just a long corridor. And this is supposedly the underground under the Pentagon. I know we went at least 20 minutes. And as we walked through the corridor, he said to me: "You know, many things do not look as it seems." We came to an end, nothing was there. I looked around and went back a bit. Finally I saw the door and told him: "What do you mean?"
"In short, many things are not as they seem to be."
He knocked on the wall and said, "Fixed wall, right?"
And I said, "Yeah." And then I started again: "What do you mean?"
Before I could say anything, he said: "Not necessarily fixed." And he pushed me in. And I walked through the wall. You see, there is nothing there, but when I was there it looked like it was a solid wall. And I passed: "What the hell are you doing?" But before I could recapture and say anything, I noticed I was in a room. I looked around. When I looked back, there was something we call the field table, which is nothing more than a small table. Behind the field table sat, as we call it, "typical gray" - an alien. 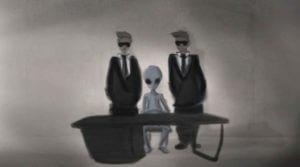 Gray in the Pentagon

Again - people will be upset - but I have to say that there was something high about 130 cm to 150 cm. He sat with his hands on the desk and looked directly at me. I was alone there. When I stood up, I looked around and saw them, I said, "What the hell are you doing?" What I have said, I still remember. I stopped as I saw them as if my circular saw had started in my head. I fell face to face. The alien pulled everything out of my mind - he read my whole life. This is the last thing I remember ...

I woke up in Jack's office. I was told nothing happened. That I had to dream. Nobody took me anywhere. We were there all the time, and I felt tired. I had to sleep.

Jack never showed up. They brought me into a service car and brought me to my unit, I was told that whatever Jack's mission was, it's still going to be time consuming, and it's probably going to be another week before he returns. It was the last contact with Jack ...