Were they here or are they here? Are we alone in space? Perhaps the most mysterious area associated with extraterrestrials is Area 51 - a strictly guarded Air Force Research Center, located in the US state of Nevada in the hot desert. The complex is out of reach of satellites, it is strictly forbidden to fly drones over it and try to get there is basically futile. You recall that there was a commotion recently around Area 51 when a group of conspirators tried to get there. In the end, however, it was a small event, and in general it was more of an upheaval on the Internet and social networks.

We do not know what was going on and going on there. Maybe the US Army is testing new high-speed aircraft and other high-tech technologies there. But UFO fans believe there are dead and possibly alive aliens and crashed flying saucers. Some of the politicians have held these views, too.

In 2016, Hillary Clinton promised America that if she elected, she would disclose all the UFOs and Area 51 information. Was she just attracting attention or was she serious? Hillary and Bill Clinton showed their enthusiasm for UFOs once.

In the 90s, the Disclosure Movement sought to release all the top-secret and confidential information that the US authorities had regarding UFOs. Conspiracy theorists have argued that various governments have evidence of extraterrestrial visits that have been detained by the public because of concerns about the potential impact on religion and the rule of law. Everything repeats as in a spiral, because today interest in UFOs and Area 51 has increased again. Bill and Hillary made promotional steps in the 90s to discover the truth, but it didn't work out well. What actually happened?

During one interview for New Hampshire Hillary said she would get to the bottom and publish everything. Which ultimately failed, of course. Or maybe it wasn't what Mrs. Clinton wanted. The question remains, what role did John Podesta - the then head of the Clinton campaign, who had previously worked in her husband's presidency, and was also an advisor to Barack Obama. He, too, reaffirmed his commitment to publish secret documents on UFOs. Maybe Hillary and Bill were involved. After Hilary was not elected, Podesta considered his failure in this regard as the greatest disappointment.

Was it just getting extra votes from UFO fans? Again, speculation. And we have another group - Paradigm. She was interested not only for the extraterrestrials to visit Earth, but even to start working with us. Stephen Bassett, 69, is the only UFO lobbyist in America for 20 years. He even believed that the Clinton should have tried to reveal the truth, just as in the 90s.

Let's imagine one important character in the story - Laurence Rockefeller. He was part of a family that was considered one of the most powerful in American history thanks to oil assets and banking. From 1993 he began to have access to Bill Clinton. 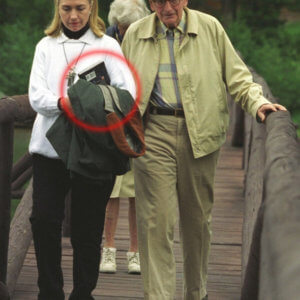 In addition, by briefing Dr. John "Jack" Gibbones, then director of the White House Science and Technology Office and Advisor to the President, in 1993 Rockefeller brought a review of the legendary Roswell case. Near Roswell, New Mexico, the US Air Force reportedly discovered the remains of a flying saucer in 1947. In the end it was supposed to be a damaged meteorological balloon.

But there were witnesses who claimed that the debris along with the extraterrestrial bodies were taken to Area 51. The UFO community then concluded that no sufficient evidence was provided. The US Air Force concluded that it was a top secret balloon that was designed to detect nuclear weapons and was to be tested at that time. For the sake of national security, it was said that it was a meteorological balloon.

Rockefeller wrote to then-President Bill Clinton a direct and open letter with threats to exclude his election ads from the press if he did not disclose facts about what really happened in Roswell. Clinton's and Rockefeller's relationships seemed to disintegrate. Dr. Gibbon received a strong warning that the letter to Clinton and newspaper ads were ready to be used as a timed weapon before his re-election in 1996. 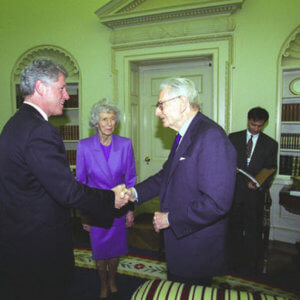 But the threat probably never became a reality. In addition to the 1994 Roswell case report, President Clinton declassified millions of military and intelligence records, but none of them were UFO-related. A series of notes and letters among all those involved revealed the extent of their discussions. The documents show both Clinton involved in this initiative.

And then it cooled. Mrs. Clinton was involved in the effort to publish all government documents on the UFOs to the public, but it failed and she and other members of the Clinton administration decided to keep silent. Hillary's attempts to have the Obama administration open what she and her companions began in the 90s failed completely. There were no answers to her open letters.

They were asked what kind of involvement they were and why their initiative failed. But there was no answer.