History of the Great Depression

The Great Depression (also sometimes called the Great Depression), beginning with the stock market crash of 1929 and lasting until 1939, was the worst economic downturn in the history of the industrialized world.

The Great Depression was the worst economic downturn in the history of the industrialized world, which lasted from 1929 to 1939. It began after the stock market crash in October 1929, which caused a panic on Wall Street and destroyed millions of investors. Over the next few years, consumer spending and investment fell, causing a sharp drop in industrial production and employment as failing companies laid off their employees. In 1933, when the Great Depression reached its bottom, about 15 million Americans were unemployed and nearly half of the country's banks went bankrupt.

What caused the Great Depression?

During the 20s, the American economy grew rapidly and total national wealth more than doubled between 20 and 1920. This period was nicknamed the "Happy Twenties". The stock market, concentrated on the Wall Street Stock Exchange in New York, has been the scene of countless speculations, where everyone from millionaire magnates to chefs and janitors has poured their savings into stocks. As a result, the stock market expanded rapidly and peaked in August 1929. 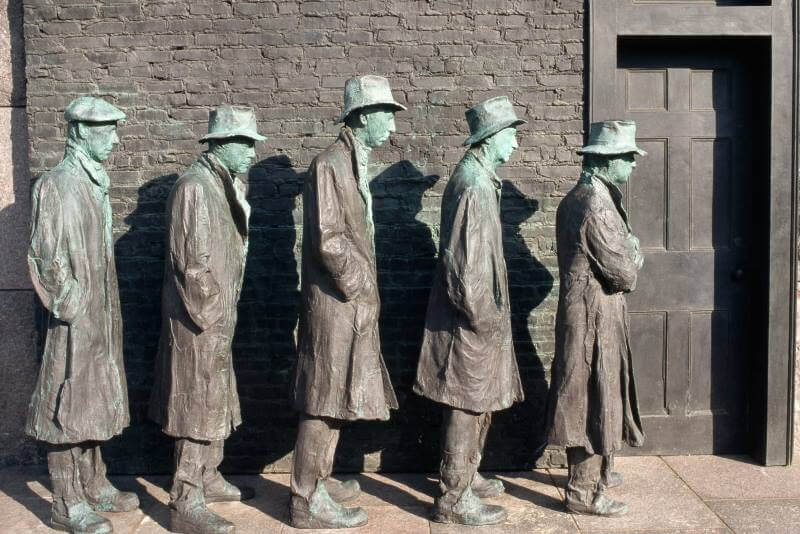 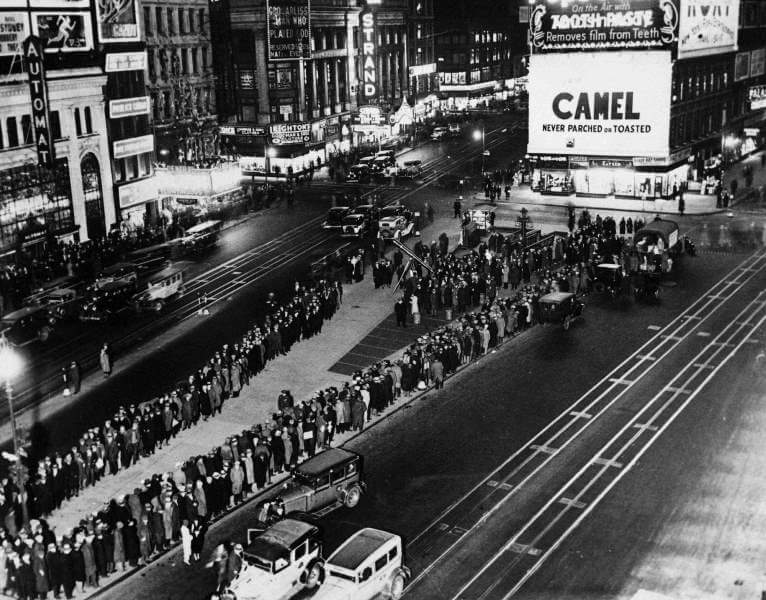 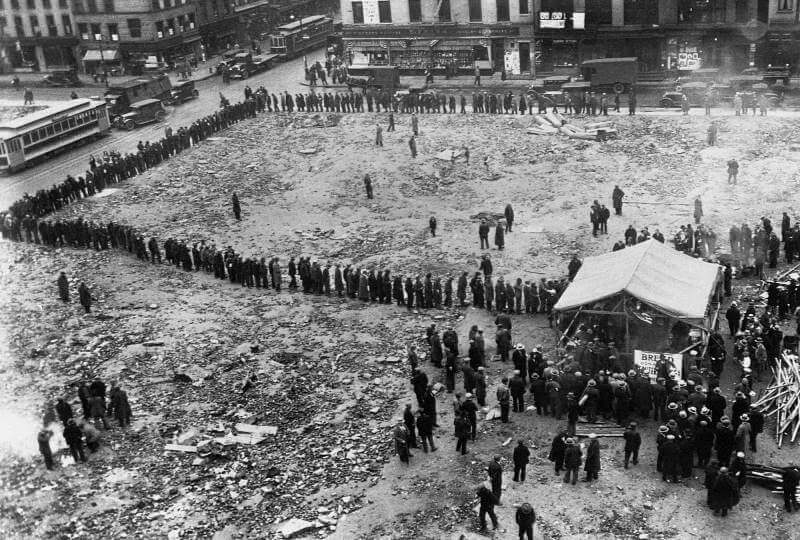 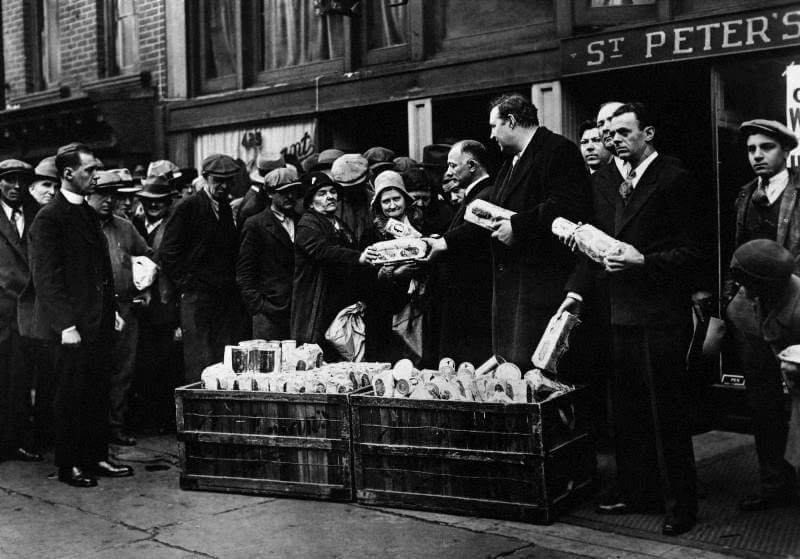 Men give bread and coffee to the needy

At that time, production was already declining and unemployment was rising, so stock prices were much higher than their true value. In addition, wages were low at the time, consumer debt was rising, the agricultural sector of the economy was facing problems due to drought and falling food prices, and banks had a surplus of large loans that could not be repaid. In the summer of 1929, the US economy entered a mild recession as consumer spending slowed and unsold goods began to accumulate, which in turn slowed industrial production. However, stock prices continued to rise and reached a stratospheric level in the autumn of the same year, which could not be supported by expected future returns.

The stock market crash in 1929

On October 24, 1929, when nervous investors began to sell out overpriced stocks en masse, the feared stock market eventually collapsed. This day, when a record 12,9 million shares were traded, is known as "Black Thursday". Five days later, on October 29 or Black Tuesday, approximately 16 million shares were traded after another wave of panic hit Wall Street. Millions of shares became worthless and investors who bought "on margin" shares were completely destroyed.

As consumer confidence waned as a result of the stock market crash, the subsequent decline in spending and investment led factories and other businesses to slow down production and start laying off their employees. For those who were lucky enough to stay in employment, wages fell, and so did purchasing power. Many Americans who were forced to buy on credit became in debt, and the number of foreclosures continued to rise. Global adherence to the gold standard, which connected countries around the world through a fixed exchange rate, has helped spread the United States' economic problems around the world, especially to Europe. 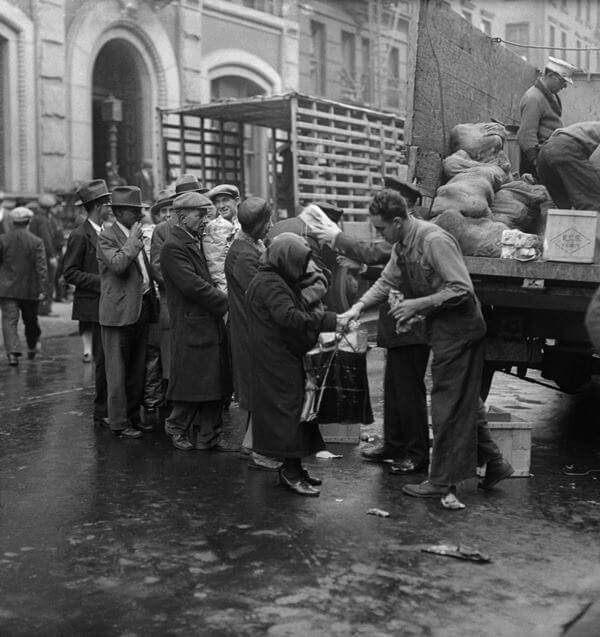 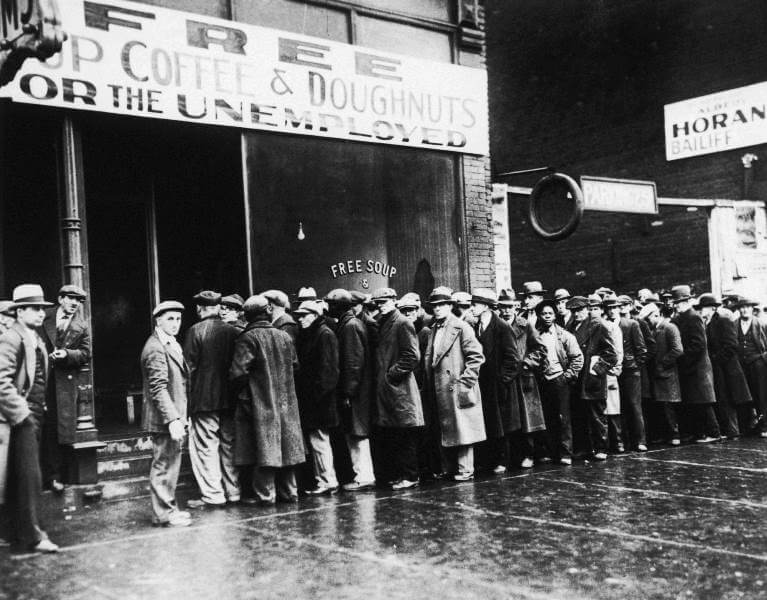 Despite assurances from President Herbert Hoover and other senior officials that the crisis would resolve naturally, the situation continued to deteriorate over the next three years. By 1930, 4 million Americans were looking for work to no avail; this number increased to 1931 million in 6.

Industrial production in the country, meanwhile, has halved. Poverty, food charities and a growing number of homeless people have become increasingly common in American cities. Farmers could not afford to harvest their crops and were forced to rot in the fields while people starved elsewhere. In 1930, strong dust storms came from Texas to Nebraska, caused by drought on the southern plains. This natural disaster killed people, livestock and destroyed crops. The so-called The "dust bowl" provoked mass migration from agricultural areas to cities where people were looking for work.

In the autumn of 1930, the first of four waves of banking panic began, as large numbers of investors lost confidence in the solvency of their banks and demanded cash deposit payments, forcing banks to liquidate loans to replenish their insufficient cash reserves. Raids on banks hit the United States again in the spring and fall of 1931, in the fall of 1932. At the beginning of 1933, thousands of banks subsequently closed down. In the face of this desperate situation, the Hoover administration sought to support failing banks and other institutions with government loans; the idea was that banks would again lend to companies that could take back their employees. 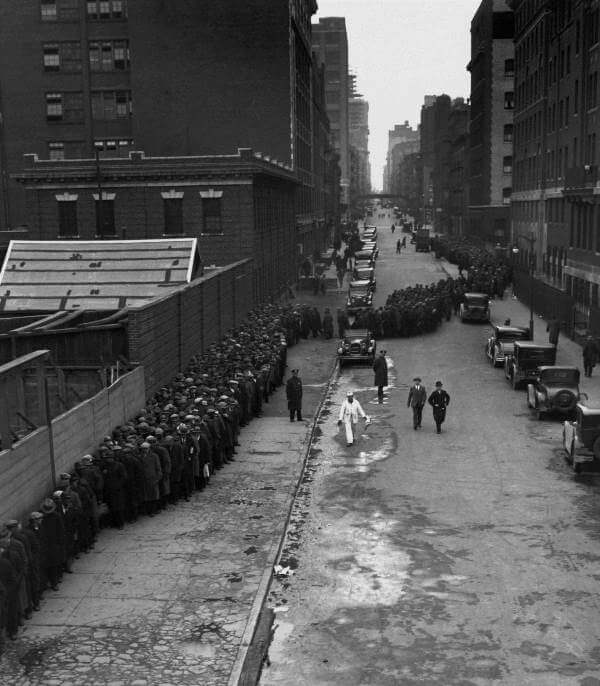 A long line of food in Manhattan at Christmas 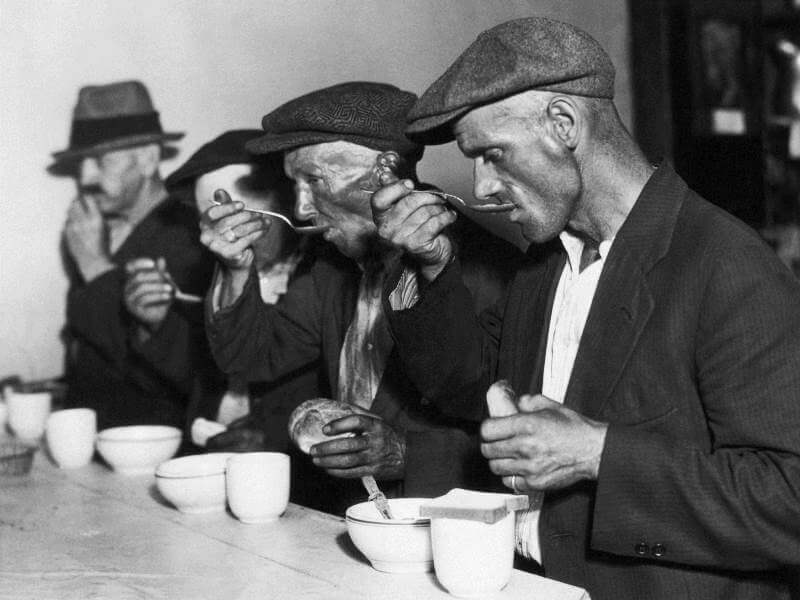 The election of Roosevelt

Originally the US Secretary of Commerce, Republican Hoover, believed that the government should not intervene directly in the economy and that it was not responsible for creating jobs or providing economic support to its citizens. In 1932, when the country was drowning in the depths of the Great Depression and about 15 million people (more than 20 percent of the American population at the time) were unemployed, Democrat Franklin D. Roosevelt won a landslide victory in the presidential election.

On the day of the Inauguration (March 4, 1933), all U.S. states ordered all remaining banks to close the banking panic at the end of the fourth wave, and the U.S. Treasury Department did not have enough cash to pay government employees. However, President Roosevelt sent a reassuring energy and optimism to the people and famously declared that "the only thing we must be afraid of is fear itself."

Roosevelt took immediate action to address the country's economic difficulties. He first declared a four-day "banking holiday," during which all banks would close so that Congress could pass reform legislation and reopen only banks that were considered healthy. He also began to address the public directly via radio in a series of appearances, and these so-called "talks by the fireplace" began a long way to restore public confidence. During Roosevelt's first 100 days in office, his administration passed legislation aimed at stabilizing industrial and agricultural production, creating jobs and stimulating economic recovery.

In addition, Roosevelt sought to reform the financial system. He formed the Federal Deposit Insurance Corporation (FDIC) to protect depositor accounts and the Securities and Exchange Commission (SEC) to regulate the stock market and prevent similar abuses that led to the stock market crash of 1929.

New Deal: The Road to Healing

New Deal tools and institutions to help recover from the Great Depression included the Tennessee Valley Authority (TVA), which was responsible for building dams and hydropower to control floods and supply electricity to the impoverished Tennessee Valley region, and the Works Progress Administration (WPA) for the creation of permanent jobs, which resulted in the employment of 1935 million people between 1943 and 8,5.

When the Great Depression began, the United States was the only industrialized country in the world without any form of unemployment insurance or social security. In 1935, Congress passed the Social Security Act, which for the first time secured Americans in the event of unemployment, disability, or retirement. After the first signs of recovery began to show in the spring of 1933, the economy continued to grow for another three years, during which real GDP (adjusted for inflation) grew by an average of 9 percent per year.

In 1937, the economy was hit by a severe recession, partly due to the decision of the Federal Reserve to increase financial reserve requirements. Although the economic situation began to improve again in 1938, this second sharp contraction reversed the positive development of production and employment growth, thus prolonging the effects of the Great Depression until the end of the decade. The difficulties of the Depression have spurred the rise of extremist political movements in various European countries. The most prominent of these was Adolf Hitler's Nazi regime in Germany. The German aggression led to the outbreak of war in Europe in 1939, and the WPA turned its attention to strengthening the United States' military infrastructure, while maintaining neutrality.

One-fifth of all Americans who received federal aid during the Great Depression were black and mostly inhabited the southern countryside. But farm and household work, the two main sectors in which blacks worked, were not covered by the Social Security Act of 1935, which meant that there was no safety net for them in times of uncertainty. Rather than dismissing domestic workers, private employers could simply pay them less without any legal consequences. And the support programs to which blacks were at least a written claim were, in practice, full of discrimination, as their implementation was entrusted to local authorities.

Despite these obstacles, Roosevelt's "Black Cabinet," led by Mary McLeod Bethune, provided that almost every New Deal affiliate had a black advisor. The number of African-Americans working in government has tripled.

There was one group of the population whose employment actually grew during the Great Depression: women. From 1930 to 1940, the number of employed women in the United States increased from 10,5 million to 13 million, or 24 percent. Although the number of working women has been steadily increasing for decades, the financial problems caused by the economic crisis have led women to seek employment in increasing numbers as men, breadwinners, lose their jobs. The 22 percent drop in marriage between 1929 and 1939 caused an increase in the number of single women who were also looking for a job.

During the Great Depression, women had a strong supporter in the person of First Lady Eleanor Roosevelt, who lobbied her husband to increase the number of women in important positions, such as Secretary of Labor Frances Perkins, the first woman to ever hold office.

Jobs available to women were paid less, but more stable during the banking crisis: nursing, education or domestic work. These positions were quickly replaced by office positions in Roosevelt's government. But there was one catch: more than 25 percent of the National Reconstruction Administration's pay scales set lower wages for women, and jobs created under the WPA limited women to areas such as tailoring and nursing, which were paid less than positions reserved more for men. 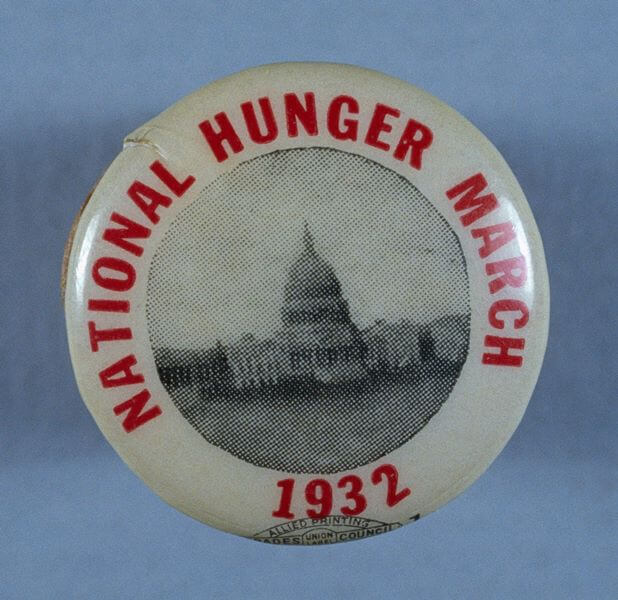 Emblem of the National Recovery Administration

Married women also faced other obstacles: By 1940, 26 states had imposed restrictions on their employment, known as "marital barriers," because working wives were perceived as taking jobs from working men - even though in practice they held positions in which men they did not want to work, and made them for much lower wages.

With Roosevelt's decision to support Britain and France in the fight against Germany and the allied Axis powers, the arms industry took off, creating more and more jobs in the private sector. The Japanese attack on Pearl Harbor in December 1941 led to America's entry into World War II and national factories returned to full production.

This expanding industrial production, as well as expanded conscription since 1942, reduced the unemployment rate below pre-Depression levels. The Great Depression finally ended, and the United States turned its attention to the global conflict of World War II.

The Third Reich, secret research, Nazi secret weapons - you will learn all this in this book. 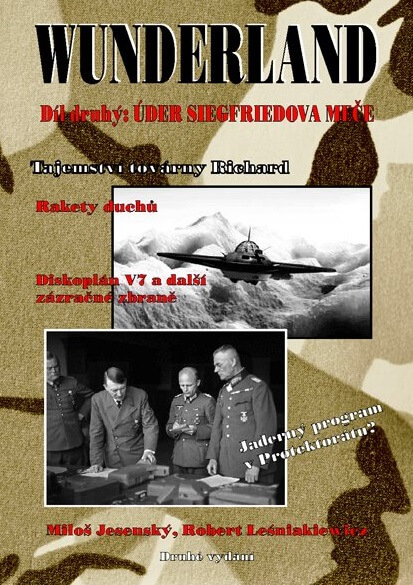