Are Hybrid Beings? According to a prominent Belgian scientist and president of the international cryptozoological society, Bernard Heuvelman, attempts were made at the Gulag camps in Siberia to artificially fertilize women from Alta with the sperm of a gorilla male. A gorilla male was specially imported from Rwanda and Burundi. The resulting viable offspring had enormous physical strength, suitable for work in salt mines.

Bernard Heuvelmans, in his book, The Mystery of a Frozen Man, brings a message from his famous (believer) that in 1952-1953 he met a Russian doctor and his friends who had escaped from the Siberian prison camp Gulag. The doctor told him he had been arrested for failing to comply with Mongolian fertilization orders with the sperm of the gorilla. These experiments were carried out at the Gulag hospital campus.

The Russians thus created a race of half-poles of height 1,8 m, covered with coats, which then worked in salt mines, had Herculean power and worked almost without rest. They grew faster than people, and therefore quickly became suitable for work. Their only disadvantage was the inability to reproduce. But researchers have worked well in this direction too!

In 1927, the emigrant newspaper "Russian Time" brought an article about the experiences of human and monkey hybrids from a Soviet professor Ilji Ivanovich Ivanov. At that time, this incredible message was amusing to the reader. 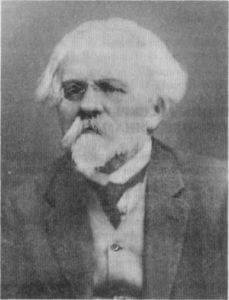 However, it is a fact that a unique document is kept in the collections of the State Archives of the Russian Federation. In this document, we can read that the joint resolution committee of the Physical and Mathematical Department of the Uherian Academy of Sciences considers that:

1) Interdisciplinary hybridization with experiments on monkeys should continue. Prof. Ivanov at the Suchum facility made a cross between different types of monkeys, as well as between monkeys and humans.

2) Attempts must be ensured by all necessary measures and carried out under conditions of strict isolation of females, except for natural mating.

3) Exams must be conducted with as many women as possible ...

However, Soviet women were not so accessible and lacked African temperament, so Professor Ivanov had problems with artificial fertilization despite the fact that the aforementioned commission had approved its recommendations. What was he supposed to do? The answer was found by the researcher himself - he had to go to Africa! This is full of monkeys and temperamental women ... and it would be solved. Ivanov turned to the government demanding financial support. In the difficult years of general collectivisation, the state has allocated almost 30 000 dollars to an expedition to Guinea.

A trip to Africa

Local women, however, rejected the role of surrogate mothers. The natives, even with great money, disagreed with any way of crossing the monkeys and hindered scientific progress. Professor Ivanov suffered the second time for a fiasco. But he did not lose his hope and desire. He assembled a single doctor to perform similar experiments at the local hospital.

The local governor against the experiments did not object, but said that they could only be done with the consent of the participating women. And again, a complete failure occurred: the gentlemen refused to artificially conceive and carry the hybrids.

However, the stubborn scientist did not give up and wrote:

"I attach great importance to the mission of the Pygmeians of Rabon, so they can not have the above-mentioned problems ..."

Whether the active scientist wants to cross with the monkeys is not known. Traces of his activities in Africa are lost. Also, the consequences of the Dryum Reservation experiments remained unknown. Either ended because of insufficient results or, on the contrary, they were strictly secret due to these results.

It is rumored that in 1929, the design of Professor V. Vedensky in the Himalayas witnessed the birth of a yeti female. The child was adopted by one of the scientists. This boy grew healthy. However, it was extremely unsightly - round, stocky and very hairy. It was time to go to elementary school. He was mistaken to learn, after leaving school, and got a job as a loader. The boy had enormous physical strength.

To be precise, he did not become a worker of his own free will. In 1938, his adoptive father became "the enemy of the people" and was sent to the concentration camp where he died. The son of a "snowy woman" died at an early age for an unknown reason. The scientific notes that his teacher has written about him are reportedly kept under the name "secret" at the Academy of Sciences ...

In the 1960s 20. century heard by the famous scientist Boris Pornishov in the Caucasus from the old witnesses story of the fate caught and crushed "Snowy women" Zany, who lived for many years with the local peasant Jadgi Genaba, had extraordinary power, worked hard and ... gave birth to his children.

They seem to have been children of her, because Zana was buried in a family tomb in the cemetery at the end of 19. century, in the village of Thina, Oshamisra district. In 1964, the scientist met two of the grandchildren of this woman. They had incredible power and worked in the mines in Tkvarchel. They had a dark skin and a neuter appearance. One of the descendants named Shaliku could hold his chair with a sitting man and dance at the same time! When it was possible to combine modern man and savage (someone could say primitives), why not allow the emergence of human and monkey hybrids? 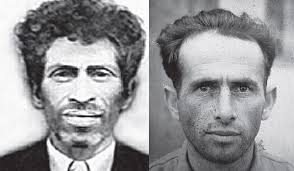 The picture is Chvit, son of Zany. On the right is one of the grandchildren.

Other descendants of Zany: 1 - daughter of Natalia; 2, 3, 4 - grandchildren - Raisa, Shaliko, Tatyana (children from Chvita); 5 - the great-grandson Robert (son of Raisy).

Embryos of women into the uterus of the chimpanzee

In 1998, UK surgeons implanted a three-week old embryo of a woman who died in a car accident into the chimpanzee's uterus. In the seventh month of pregnancy, this surrogate mother gave a caesarean section. The child was placed in an incubator where it normally evolved. This was not the first attempt by scientists to transplant the human embryo into the animal.

From here it is no longer far from the connection of species. It is known that New York biologist Stuart Newman has created and tried to patent this animal production technology, which he calls chimeras.

Frank Hansen and his exhibit

Scientists say they have found a way to combine human and animal genes. In addition, it was reported that in 1968 for more than a year and a half, America traveled a specially equipped physicist Frank Hansen. In the livestock markets, this enterprising Yankee (a former military pilot) has shown 1,75 as a dollar to his curiosity exhibit. 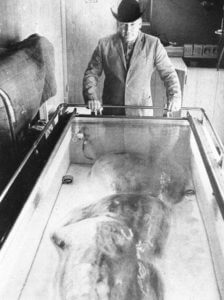 Hansen and his exhibit

In the middle of the motor vehicle was a metal box (like a coffin) with a lid made of four-layer glass. A large man's body was covered in a layer of ice covered with dark brown hair. The special refrigerating device maintained the required low temperature. It was Yeti. When Bernard Heuvelmanns, formerly mentioned, along with his friend, famous American scholar, writer and zoologue Ivan Sanderson, went to Minnesota where Frank Hansen lived.

For three days, scientists have studied the corpse of an unknown creature kept in ice. They surveyed, drawn, shone, flashing, photographed and recorded. They wanted to light the object with an X-ray and even defrost it for further study. But Hansen, when he learned who he was, did not allow it, and referred to the ban on the real owner of the frozen body.

How did the body of the exhibit look like?

Scientists have explored the exhibit to keep information for science. The body is massive. Its weight is about 115 kg. The hull is not tapering at the waist, but only towards the hips. Breast width is large due to the length of the hull. The ratio of the length of the arms and legs, apparently corresponds to the proportions of the human ... Very different from the dimensions of human limbs the proportion of hands. The neck is extremely short. The jaw is massive, broad and without protruding chin. Mouths are wider than humans, but almost have no lips. The rough, yellow nails are of the human type. 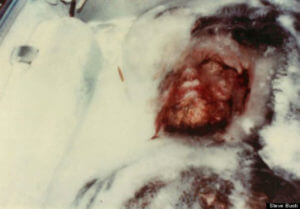 The genitals had as a human, not monkey type, which are not large. The anatomical detail of the knee and leg structure reliably proves that this creature was upright. Some details show that it was on the inside of the foot, not the outside, as the monkeys do. This is exactly the same as the traces of the Quartet's ape, located in Hungary, or the same traces of the living paleoanthrop (fossil human) in Ťan-Shan and the Caucasus.

This scientific knowledge of unusual beings is of enormous value, Hansen said through the Saga magazine. He further reported that this monster was killed in Minnesota by a Mauser type rifle when deer. He later changed his testimony and said an interview with him could be used against him (as a murder charge) because he did not provide information under oath and was free of charge.

He promised to provide his exhibit for scientific research if the authorities gave an amnesty to those people who had violated the federal law on the import of such objects and handed him this monster. Otherwise, the creature drowned in the ocean. Later he retreated and replaced the corpse with a mannequin. He apparently learned about the confiscation of this "smuggled object".

It is possible, therefore, that Hansen's exposure was the result of secret experiments carried out in the Siberian Gulag camps. Is it possible that even the "Bigfoot", which is found in America, is also a hybrid of Gulag?

At the beginning of 1990, the American press reported on the birth of Katie Martin's "Bigfoot" child. In 1987, a young woman came out of the Rainier Mountains and met a two-meter-long snowman. Several days spent together and then 28. April 1988 bore Katy's son whose head and neck were completely covered with dark curly hair. The doctors conducted DNA research and found that the boy's genetic basis was only partially human. The son was strong and hairy to his father and had artistic and mathematical skills. "I'm very proud of him," said the mother of an unusual child. "He knows his father was a snowman."

The Lost Legacy of the First Chinese Emperor (Episode 2)