When excavations in the area of ​​ancient Indian cities Harappa and Mohendžodaro (Aka The footers of the dead) reached the level of the original streets, piles of skeletal remains were scattered throughout the cities. Many skeletons are holding hands and lying on the ground as if they already advance theirs carriers they were expecting a terrible fate. It looks as if they were just lying on the street, not burning.

These skeletons are thousands of years old and according to traditional archaeological standards. What could have made people behave in this way? Why did wildlife not spread the decomposing corpse? Officially, the cause of this massive violent death is unknown. But it is true that these skeletons are among the most radioactive ever found in excavations. The radiation level is comparable to the skeletal remains of Hiroshima and Nagasaki.

In one particular place, Soviet scientists they found a skeleton that had 50x a higher degree of radiation than normal background.

The cities of Harappa and Mohendžodaro are not the only place with a similar fate. There are others that have the same flags indicating a large scale explosion. For example, one city is located between the two springs of the Ganges, near the Rajmahal Mountain. Everything suggests that this place has been exposed to extreme temperatures. The vast masses of the walls and the foundations of the city melted and merged with glass or ceramic mass. 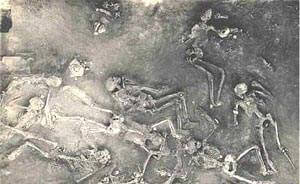 No evidence of volcanic activity

In Mohenzodaro and other cities there is no evidence of volcanic activity of such a large scale. One logical explanation would be to admit the existence of something that could be likened to a nuclear explosion, or, therefore, to another weapon of unknown origin that has no less terrifying effect. Whatever it was, it had a totally devastating effect on all the cities and their inhabitants.

According to radiocarbon dating, it is assumed that the scaffolds are from 2500 before our year. But we must bear in mind that if the skeletons were exposed to strong radioactivity, we would appear to be much younger than it would be in ordinary reality.

It must be remembered that the consideration of nuclear weapons is not accidental. Historical Indian texts (like the Mahabharata) clearly speak of the fact that the gods possessed weapons of mass destruction (Brahma Sastra) in ancient times. There were several species. Some burned thousands of suns in the fire, others eradicated the enemy from the world.

If, however, we were to think of some fatal volcanic activity, then compare what it looks like in Mohendžodaro and Pompeii, where the cause of city ruin is obvious. The concomitant phenomena that the volcanic dust in the latter case has saved us are obviously different. In the case of Mohendžodaro and the other cities, it had to be different. That there would still be a nuclear war in India at the time of more than 4500 years? Terrifying? Our company for the development of a nuclear weapon since the discovery of radiation in the first modern nuclear explosion was less than 100 years.

Some offspring of the first nuclear explosion said, "We did it before ...": We've done it before