The unearthly yellow and greenery stain the hot soil around Dallol volcano in northern Ethiopia.

This marvelous place is full of hydrothermal springs, for the most inhospitable places on the planet Earth. According to a new study, some are even completely lifeless.
"Various forms of life on our planet have adapted to the sometimes incredibly hostile living conditions, be it temperature, acidity or salinity (= salinity)." Says the co-author of the study Purificaión López-García, head of research at the French National Research Institute.

But can some form of life survive in an environment that combines the above three factors in extreme values ​​in the colored waters of the Dallol hydrothermal region?
To determine if this extreme environment exceeds the adaptability of anything living, researchers took samples from several lakes (with high salt concentration) in the area. Some were extremely hot and acidic or alkaline, others less. They then analyzed all the genetic material found in the samples to identify possible life forms.
“Some of the more life-friendly ponds had an amazingly high concentration of sodium chloride (salt) in which some microorganisms can thrive. The more extreme environments had a high content of mustard salts, almost incompatible with life as magnesium breaks down cell membranes, ” says López-García.

In these extremely acidic and boiling environments with the presence of mustard salts, researchers have not found a single sign of DNA, ie no traceable sign of life. In spite of this, a “grain of a grain” of DNA of a unicellular organism from the group was recorded Archaea (systemically at the bacterial level), when in the individual extraction processes according to Lopez-Garcia "went to the pulp" by amplifying the individual substances (imagine it as a digital zooming of the image to the pixel level). But the hypothesis of the researchers is that this tiny amount of DNA was contamination from the neighboring salt plains, brought to it on visitors' shoes, or was blown by the wind.
On the other hand, in the “more friendly” ponds, a large number of weird microbes were found, mostly from the aforementioned family Archaea. According to Lopez-Garcia "The diversity of representatives of this family is very large and unexpected". In addition to the well-known salts and heat-resistant species, the researchers also found species that they did not expect to adapt to less salty ponds.
Their findings suggest that there is a gradient between places that contain life and which do not. Similar information can be crucial in the search for life in space, he adds. "The hypothesis is that any planet with the mere presence of water is habitable," but as the dead Ethiopian lakes demonstrate, water is vital but not sufficient. In addition, researchers have been able to detect so-called microscopes using microscopes. biomorphy (mineral chips reminiscent of tiny cells) in samples from both 'living' and 'inanimate' ponds. López-García says: "If you get a sample from Mars or fossil environments and see tiny round things, you may face the temptation to claim it is a microfossil, but it may not be." 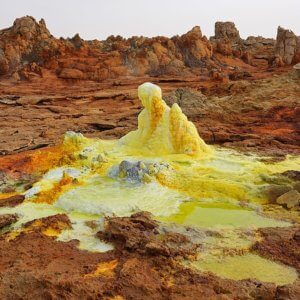 Precipitated salt, sulfur and other minerals around the Dallol craters

Proof that life is not

However, there were also significant gaps in the study. John Hallsworth, a lecturer at the Institute of Global Gastronomy Security, wrote in a magazine Nature, Ecology and Evolution an accompanying word explaining this. For example, DNA analysis failed to determine if the recorded organisms were alive or active, and it is uncertain whether measurements of water factors such as pH were performed correctly. What's more, several months before the results were published, another team of researchers came to work in the same area with a hypothesis almost opposite. In the ponds, according to them, representatives of the group Archaea "Well," and various types of analyzes confirmed that these microorganisms were not introduced as contamination. Behind this theory was biochemist Felipe Gómez, published in May in a magazine Scientific reports.
"Because of the risk of any kind of contamination, microbiologists working in such extreme conditions must take many precautions to prevent them. At work we worked in totally aseptic conditions, ” he suffocates, adding that it is uncertain why there is such a marked difference between the results of both studies. Since the first research team did not find anything that the latter wrote about, there is still much work to be done. But according to Gómez, this does not mean that the second study may be misleading.
According to López-Garcia, Gómez's study is "bullet-proof" because its authors have not taken sufficient steps to eliminate the possibility of contamination and is also skeptical about the quality of the samples.
"There is abundant migration in the area," so trace amounts Archaeai here it could be dragged by tourists or by the wind, just as her team had discovered its tracks Archaeaibut identified them as contaminants.
These findings were published on 28.10.2019 in the magazine Nature Ecology and Evolution.

Ganjnameh: inscriptions carved into the rock