Cave art from Indonesia is changing the cultural development of mankind

A significant discovery was made in a limestone cave on the Indonesian island of Sulawesi - the oldest known hunting scene in the world was identified on a hard-to-reach reef. At least 43 years ago, someone decided to climb into a cave and paint portrayals of people like pig and buffalo characters. It is almost impossible to uncover the meaning of the symbolic system used by the author without the time machine, but there is still much to be learned from Indonesian cave art. An area covered with paintings was discovered in Leang Bulu 'Sipong 900 and researchers in Nature wrote that: “this hunting scene is - at least we know - the oldest storytelling and the earliest figurative art in the world. This means that it is quite a discovery for people engaged in the cultural development of humanity.

People-like characters on the hunt
What the researchers found is a 4,5-meter-wide panel of cave paintings depicting eight small, human-like figures armed with lances or ropes, accompanied by two Celebian pigs and four dwarf anoa buffaloes, which the researchers described as "small and furious hikes that still inhabit gradually disappearing forests of the island. ‟It seems to be a hunting scene. All the characters were apparently painted in the same artistic style and technique using dark and red pigments. When Ancient Origins (AO) contacted the co-author of the study and Professor at the Australian Center for Human Evolution (ARCHE) Adam Brumm to find out more about the discovery and its significance for the primeval artists who created it, there were indications that cave art “may reflect the work of one single artist, but at the moment, other people cannot be intuitively excluded.‟ The anthropomorphic figures depicted here are called therianthropes because they have animal elements like elongated lower faces that resemble muzzle. One of the researchers, PhD student Adhi Agus Oktaviana, described their appearance in much more detail in a Griffith University press release stating: “Hunters depicted in the ancient cave art of Leang Bulu 'Sipong 4 are simple figures with human-like bodies, but their heads and more parts of the body were portrayed as avian, reptilian, or belonging to other animals endemic to Sulawesi.

Cave art for ritual and spiritual purposes?
When asked about the importance of painting, Brumm said:
“The cave itself shows no signs of human settlement except for the paintings. This observation and the fact that it is located in a hard-to-reach spot on the cliff wall a few meters above ground level. This may indicate that the cave itself (and / or the process of creating art in a place that seems to be a liminal space) had some sort of special cultural / ritual meaning and purpose.
This idea is further supported by the depiction of therianthropes, which the study's authors say in a press release, "may also be the earliest evidence of our ability to imagine the existence of supernatural beings, the cornerstone of religious experience." he thought, probably in a spiritual framework, about the union of man and animal. In a press release, Brumm explored this idea further. "The images of therianthropes from Leang Bulu 'Sipong 4 can also be the oldest proof of our ability to visualize things that do not exist in the natural world, a basic concept that underpins modern religion," he said, continuing:
“Theriantropists appear in folklore and narratives of almost every modern human society, and in many world religions they are considered gods, ghosts, or ancestral souls. The Sulawesi are now home to the oldest depiction of this species - even older than the 'lion man' of Germany, a statue of a lion-headed man about 40 years old, which was still the oldest depiction of the therianthropa. the characters were supposed to represent masked hunters, because "that would mean they would disguise themselves as little birds, which would be unlikely." Instead, they wrote:
“The conspicuousness of therianthropes in the oldest hunting scenes also suggests a deep-rooted symbolism of human-animal connection and hunter-prey relationships in spiritual practices and traditions
narrations and ways of portraying our species. ‟ 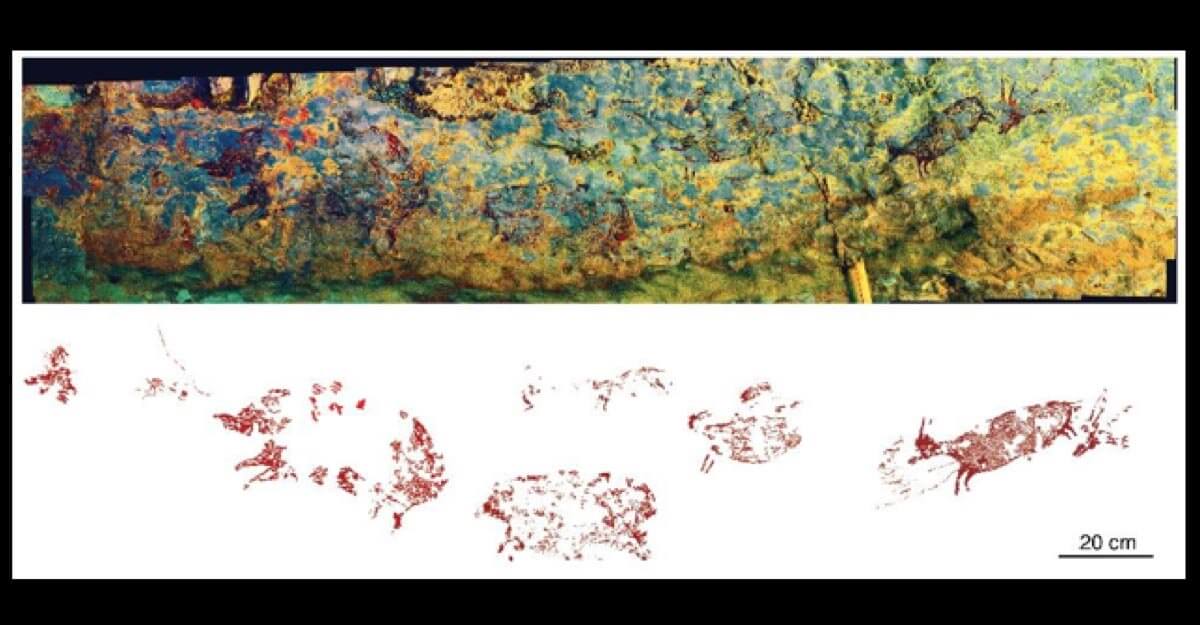 Cave popcorn dates paintings
Brum told AO that the cave itself was not suitable for archaeological research. "There is no place to dig in the Leang Bulu 'Sipong 4 cave site because there was no archaeological layer," he said. “But we explored some other sites with cave art in the area. Unlike Leang Bulu 'Sipong 4, these sites are located at ground level and our research has revealed a number of archaeological finds dating back to the earliest cave art ‟This means there were no artifacts in the cave that could help date the cave art discovered in 2017, but was published only now in Nature. However, another method of dating was used - and this included something that scientists call "cave popcorn."
The Griffith University press release states that researchers used uranium-thorium analysis to date a mineral coating (cave popcorn) that formed on cave paintings and obtained results ranging from 35 to 100 years ago. By comparison, the dating of the cave art of the European Upper Palaeolithic is generally mentioned between 43-900 BC. In a press release, Professor Aubert stressed the importance of the finding for reflecting on how art culture evolved. “Cave paintings from Leang Bulu 'Sipong 21 indicate that, over 000 years ago, Palaeolithic art did not evolve from simpler to more complex - at least not in Southeast Asia. All the main elements of highly developed art were present at Sulawesi 14 years ago, including figurative art, scenes, and therianthropes. 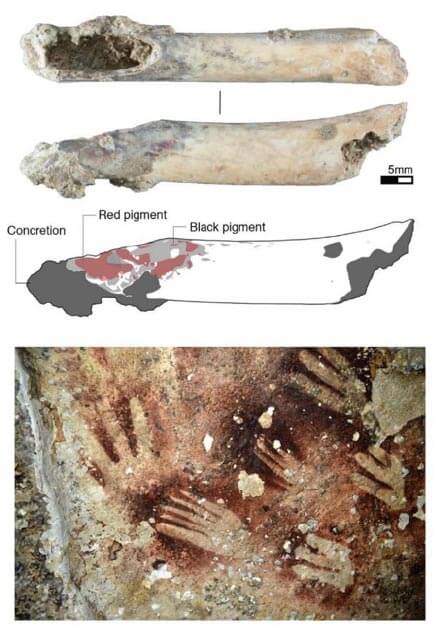 Local view and next steps
Professor Brumm also collaborated with Griffith University's archaeologist Professor Maxim Aubert, and Slawa's archaeologist and Griffith University PhD student Basran Burhan. Brumm AO said a little about the locals' view of the caves in which the paintings are located. He stated:
“The local people of Bugis-Makasar are generally devoted Muslims, but they still preserve the rich and probably centuries-old folk traditions associated with the numerous limestone caves and rock shelters of this part of Sulawesi. Most often, caves are perceived as dwellings of spirits or spiritual beings and most people avoid them. Local priests (dukun) are often sent to caves before we begin digging or doing scientific work to avert spiritual dangers.
Brumm AO said they plan to continue exploring the area around the cave where the cave paintings were discovered. "This limestone karst of Maros-Pangkep is an area rich in rock art, and there are likely to be many more remarkable caves of paintings waiting to be discovered," Brumm said.
As with many other regions around the world, archaeologists have expressed concern that the team is racing with time during their research. In this situation, natural influences and their role in the deteriorating state of cave art are a major source of concern. But Brumm expressed the hope that “by carefully researching and dating the images themselves, we will learn as much as possible about the people who created them, and by exploring cave art sites will reveal the secrets of this ancient culture.” Exploration of an area rich in prehistoric art continues for their revelation.

I am Iškomar (7.): Why are we getting older? Astral traveling

I am Iškomar (6.): Transfer of intellect and religion