They discovered an alien mineral in Israel, harder than diamonds

11 most controversial postage stamps in US history

Aliens - who are they? And who are we actually?

They say they live among us or aliens are visiting us whether the government is infiltrated by landless visitors. But who are they? And who exactly are we? The classical scientific view tells us that we, as a civilization, come from one species and share the same origin. We imagine that we evolved from apes and, like the whole civilization, have the same past and carry the same DNA. But it's not that simple.

We are all aliens

The universe is very diverse and dynamic. Just as people migrate between countries, so do planets and entire civilizations. A certain area will be hit by war and unpleasant periods, people will start looking for more favorable living conditions and migrate. The same thing happens on a planetary scale. People on a certain planet will be wiped out by war and destroy all the conditions for their lives. Of course, all those souls, those beings that have evolved here for thousands of years, do not end there. It must be arranged so that they can continue their experience, the planet will cease to be habitable, so civilization must move elsewhere and evolve further. And so the individual civilizations are mixed.

So it could be said that at this time we are all partly aliens, because the planet Earth has excellent conditions for the development of life and is therefore no exception.. There is no one who carries the DNA of a purely indigenous population, those who evolved from lower forms of life and never had a home other than Earth, and over the years we have all become a mix of all civilizations that have either migrated here or come for another reason.

So who are they actually?

Well, it depends on who we are talking about when we say aliens are visiting us.

As dynamic as the universe is, it is also full of life. It is in constant motion and everything is constantly evolving. Just as our development comes from lower forms of life, so we move on to higher forms of life. So if we hear that aliens are coming to us in advanced vessels approaching the speed of light, the recognition that they must be a more advanced race certainly makes sense. Most civilizations that are capable of interstellar travel are, of course, more advanced technologically, but this already gives the impetus that they must be more advanced in terms of being.

But let's not limit ourselves to the idea that extraterrestrial activity around our planet is not rich. There are many different races at many different levels of development. However, it is not guaranteed that when we see so-called UFOs or encounter cases of human abduction, aliens are behind these activities. In fact, most of the sightings are our military, which runs transnational programs unknown to the public. However, this does not exclude that they were not assisted in this technology by another more advanced race, and therefore, that in itself is a kind of "proof" of something more.

And it is these secret transnational programs that are a great link to other extraterrestrial races today. Growing in an incredible way since the 50s, today they carry hundreds of thousands of active workers. Scientists, engineers, doctors, soldiers and others, working under the baton of complete secrecy and often believing that they are working together for the greater good of humanity.

With their bases on the Moon, Mars, various craters and other bodies in our solar system, and last but not least the underground bases on Earth, these people are beginning to realize that the technologies they work with on a daily basis can solve all humanities problems. on Earth, do not go to their publication and help humanity. Thus, individuals are beginning to appear who, in spite of all the dangers of violating this secrecy, present their testimonies of their active activity in these programs. And here we come to the information that sometimes on the far side of the moon it looks like Times Square in New York. That cooperation with extraterrestrial races is quite common at a certain level of the program, and that many of them are very similar to humans and others are completely different.

However, it is information and knowledge that has jumped into the future for hundreds of years, and it is necessary to take everything with a grain of salt. Nowhere to hurry with anything and to deal mainly with what resonates with us internally and really makes sense to us.

Spaceships, Sumerians, pharaoh technology - all of this will guide you world-famous Erich von Daniken.

The reader will learn about the discovery of mysterious underground spaces in Giza, as well as the oldest cuneiform texts of the Sumerians recording the existence of spaceships. He will get acquainted with the most advanced technologies of the pharaohs, he will know the motivation of prehistoric artists creating stone monsters, he will be presented with clues and contacts of humanity with extraterrestrial civilizations and about ancient genetic manipulation. Are we really heirs to extinct cultures? 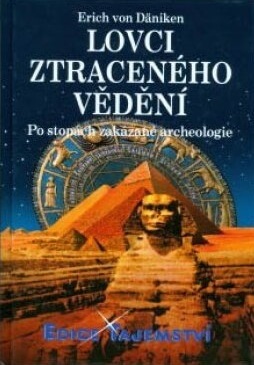 They discovered an alien mineral in Israel, harder than diamonds

6 comments on "Aliens - who are they? And who are we actually?"