This color map of the Earth is a picture of what we breathe. Yippee map of smoke, dust and other aerosols across the planet. NASA created visualization using data from Earth-bound satellites and ground sensors, and then added fake colors to designate the types of aerosols displayed.

We live our entire life from one cloud of dust to another. The air is full of salty water that flows from the sea, black carbon blacks from fires and all dust emissions from the heavy industry. Usually everything dirty in aerosols is invisible to us - but not for NASA satellites and ground sensors!

On a stunning illustration, NASA shows invisible small particles swirling around us. NASA has combined data from multiple satellite sensors such as Moderate Resolution Imaging Spectroradiometer (MODIS) on water and terrain, as well as ground sensors to create a color image of aerosol clusters. 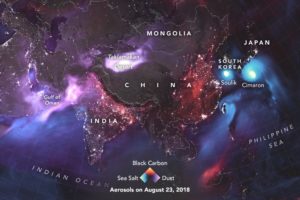 How do dust clouds develop?

Some of these dust clouds are the result of weather events. Hurricane Lane near Hawaii, typhoon Soulik and Cimaron near Japan ejected more salt into the atmosphere. In the Sahara desert in northwest Africa and the Taklamakan desert in northwest China, terrestrial winds formed similarly formed fine particle clouds. West North America and southern central Africa reveal signatures of another kind of aerosol: smoke from fires that are often founded by humans - whether deliberately, as part of the annual agricultural cycle in Africa, or negligence like North America. Some of the smoke from North America appeared drifting east of the Atlantic Ocean as shown. 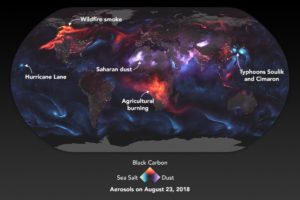 NASA noted that this shot was not shot with a single camera. It was created by combining data from several sources to identify places with the densest concentration of free particles in the atmosphere.