Above the arid, flat landscape of today's Iraq, here and there rises low and higher hills popularly called telly. But these are not natural peaks, but the remains of ancient cities of ancient Sumerians, Acadians, Babylonians and Assyrians. All these nations worshiped a similar pantheon of the deities, to whom they offered rich sacrifices in the form of animals and food in their temples. The temples have changed over time - from a modest building built in Erid at the beginning of the bypass period (5th millennium BC). to the mighty Babylonian ziggurat Etemenanki and the Esagila complex from the 1st millennium BC These temples were the center of life of Sumerian society and economy, since the temple owned land and provided for the storage, processing and redistribution of human labor products. At the same time, some of these products were intended as sacrifices to the gods. A characteristic feature of the Sumerian temples is the elevated plateau on which they were built, which over time has evolved into the shape of the famous tiered towers - ziggurats. The temples were not only the economic center of the city, but of course also religious. People visited them with their prayers and left them with gifts, such as stone bowls bearing a donation sign or statues of supplicants to pray for them. At countless festivals, the magnificent processions of the gods led to various cities, most often to Nippur, the largest cult center of all Mesopotamia and the seat of the king of all gods, Enlila. 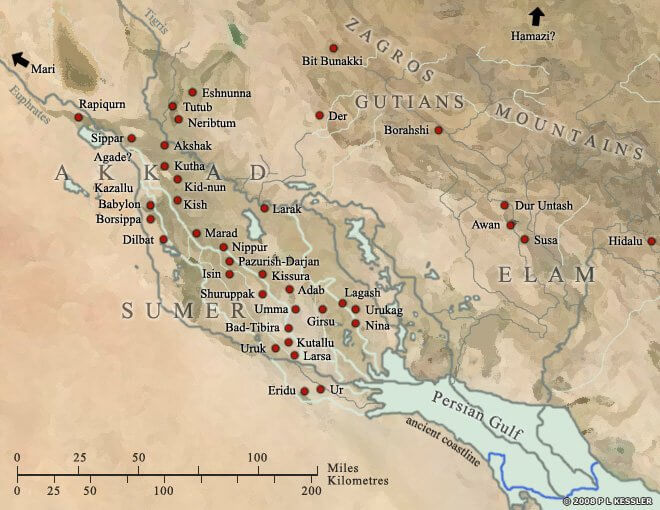 From many tables found in the cities of ancient Mesopotamia, generations of researchers have been able to revive extinct legends of long-forgotten gods, goddess heroes and kings. Here we learn about heroic deeds, the struggle of order and chaos, the creation of the world and people, but also about the complex relationships between the various gods, their courtship, marriage, disagreement and friendship. It is from these legends and hymns that the descriptions of temples - the dwellings of the gods - that float or descend from heaven come from. The gods and kings also rise to the heavens or descend to earth. But it is not just texts, often difficult to understand or poorly preserved, that tell us about the knowledge of flight at ancient Sumerians. Numerous depictions on sealing rollers and reliefs depict buildings with wings, perhaps an expression of flight, or a king rising on an eagle. From the later period of the Babylonian and Assyrian Empire are known to depict Apkallu, geniuses in fish costume or winged, and the portrayal of a winged disc in which the deity sits, usually the supreme god of the Assyrians of Ashur.

Flying temples and gods in the world

However, references to ancient flying machines and cities are generally known from texts other than Sumerian legends. Perhaps the most famous flying machines of ancient myths and legends are the Vimany of the Indian gods. According to the Sanskrit dictionary, Vimana literally means "what is measured" and refers to royal palaces with their ingenious construction. Later the word became synonymous with palaces as such and was also used as an expression for palaces of gods. It is in this sense that one can see the connection with the Sumerian texts, in which the temples are also described as the seats of the gods, and like vimans, they float, descend from, or ascend to heaven. Sanskrit texts also contain flying war chariots of the gods, and a similar element also appears in Sumeric literature, especially in relation to God Ninurt / Ningirsu and the goddess Inanna, who in one of the myths escapes the heavenly barge. 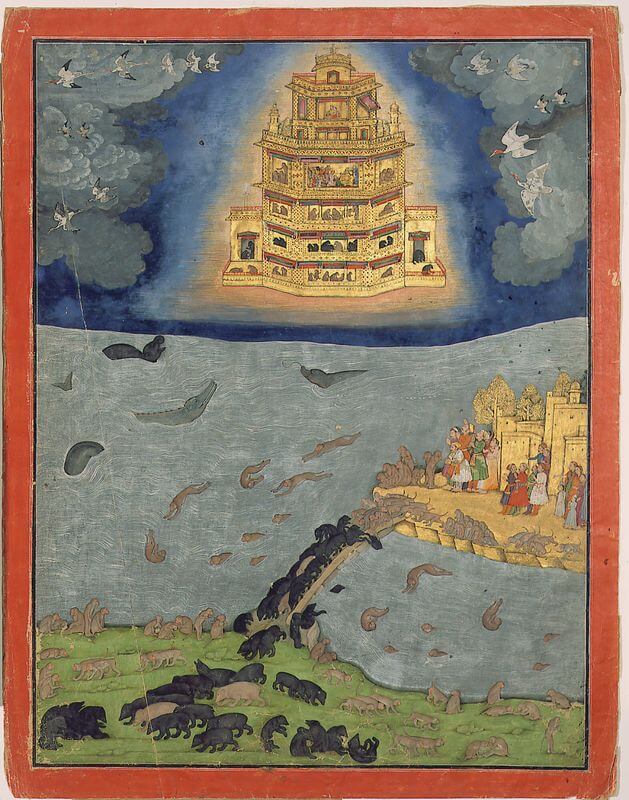 Similar references are also found in the Bible, such as the famous flying machine described by Ezekiel, who will later receive accurate instructions from God to build a new temple. But this is actually a landing platform for a machine in which God descends to the earth, as Erich von Däniken points out. Ezekiel acted according to the exact instructions of God, as did the Sumerian ruler of Gude, who, in the dream, appeared to the god Ningirsu with precise instructions for building the temple, his dwelling. The Bible also describes New Jerusalem of John's revelation, a vast city of incredible proportions, shining and descending from heaven. The Temple Mount itself, on which stood the first temple in Jerusalem, built according to God's instructions, represents a perfect platform elevated above the surrounding landscape. Thus, it seems that ancient visitors from the stars needed such landing platforms, as the Sumerian texts suggest, in which the platform on which the temple is built is a very important part of the construction. It is worth noting that in the original Hebrew Bible the temple is referred to as the "house" as in the Sumerian and, indeed, Indian texts. 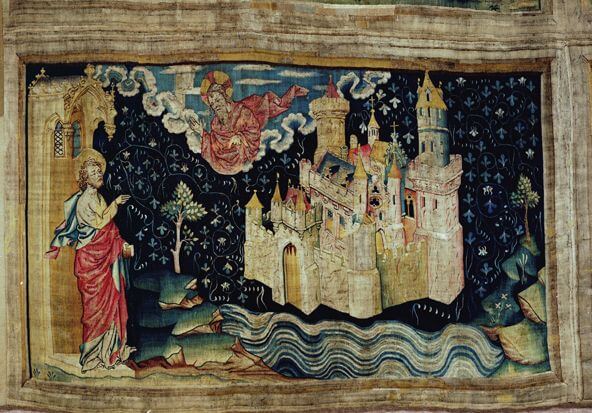 New Jerusalem in the imagination of medieval artists. Tapestry of the last courts of Angers, 14th century.

Indeed, references to gods or beings descending from heaven are part of almost every mythology around the world, and the enumeration of all examples would be too comprehensive. We can meet them in Mexico, China and African or Australian tribes.

I would also like to say that in these articles and excerpts of ancient texts I use the established term god or goddess for beings we are used to refer to today, but only because they are easier to understand for today's readers. It should be stressed, however, that this term is misleading if it is understood in the same way as the modern concept of God or Gods, because Sumerian gods were not only personification of natural forces or invisible cosmic laws to society at that time, but were real beings, whether incarnated in material reality or occupying higher dimensions, as Zecharia Sitchin and Anton Parks have previously pointed out. This is evidenced by the fact that in myths, but also in historical texts, rulers and priests personally met and spoke with them, such as the ruler of Gude, who met the goddess Nanshi to interpret his dream in which met the god Ningirsu. The gods also did not hesitate to enter into bonds with people, as evidenced by love poems celebrating the love of the goddess Inana and the shepherd Dumuzi, or the colorful description of King Enmerkar, who boasts of his rival sharing the bed with the goddess.

Drawing of the imprint of the sealing roller of the ruler Gudei of Lagash, on which his personal god Ningishzida brings him before a seated god.

Evidence that they are truly extraterrestrials can, of course, be found directly in ancient cuneiform texts. They tell stories of how the Anunna beings descended to the ground, divided it among themselves, created man and gave him the gift of civilization so that he could serve them and provide them with subsistence. These texts also refer to the use of advanced technology, whether it be gene manipulation leading to the creation of man, rule over mysterious programs called Sumerian ME, or direct references to flying and using weapons of mass destruction. In addition, the Sumerians themselves emphasized the heavenly origin of these beings by writing a star symbol in front of their names, which was also an expression of heaven. More details about the Sumerian gods can be found in my article Anunna - Star beings in the Sumerian texts.