Inanna seizes the House of Heaven

Another description of the Sumerian temple as a flying object descending from heaven comes from the fragmentary preserved poem Inanna and An, whose central theme is Inan's empowerment of the residence of the god Ana, who was the highest of all gods and is interpreted as the personification of heaven itself. Although the piece is very sketchy and its interpretation is difficult, we have a description of Anna's E-Anna's residence:
“E-anna comes from heaven,… the lady of heaven (Inanna) fixed her mind on the seizure of the great heavens,… Inana fixed her mind on the seizure of the great heavens…. she fixed her mind on the seizure of the great heavens. ”
So we can see clearly here that the residence of the god Ana lands on Earth, and Inan, who is on it at that moment, is going to acquire it for himself. Inanna is known for her ambition and desire to dominate all spheres of existence, both celestial and underworld, as evidenced by a much more famous poem about her descent into the underworld, death, and resurrection.
However, the description of E-Anna as a flying object does not end here. As we learn later, Inana entered into a collusion with her brother Utu and explained that she wanted to get E-Anna for her lover, the ruler of Uruk, whom An refused to give E-Anna. In the next, severely damaged part, we learn that Inana has partnered with a fisherman to help her seize E-Anna. Amazingly, they are looking for E-Anna in the swamps and reeds where she was hidden. The angler is also afraid that they will be spotted and a “bad wind” will be sent against them to topple their boat. When they discover it, they are astonished:
“Adagbir,… Enlil,… through thickets and high reed. She looked in amazement at E-Anna, who descends from heaven. ” 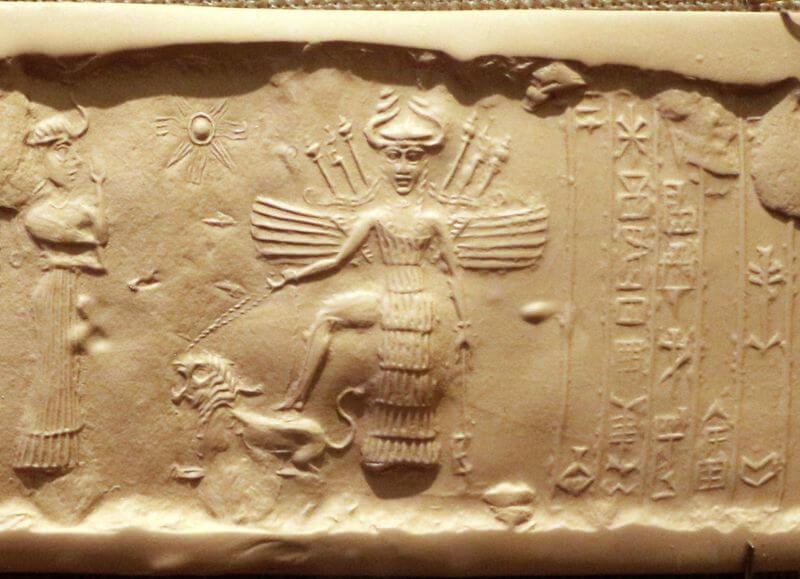 Inanna depicted on a sealing roller from the Akkadian period.

So Eanna lands in the swamps near Uruk and Inanna is about to seize her. From the following description, it seems that one of Ana's servants is guiding E-Anna to land:
“Shul-a-zida, the shepherd of Anus, took the cosmic rope in his hands. After falling ... from heaven, he overcame the protective deities. … And keep it below the horizon. ”
Before Inanna invades E-Anna, she performs a protective ritual involving stamping on a scorpion and drinking cleansing water, which may be misunderstood metaphors. In the next part she already speaks to Ano, but she has not survived. But An's reaction is surprising. An sighed that Inana had become more powerful than him, and determined that the length of day and night would change, while the equinox would occur. At the end of the song, it is said that Inanna seized E-Anna and is now her mistress, the most powerful of all gods. 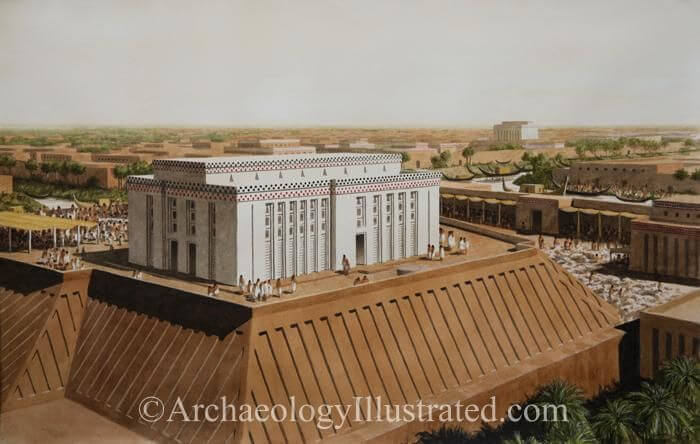 This poem, as in most Sumerian mythological compositions, mixes a description of the true events, the story of the origin of things, and the cosmological phenomena associated with these events or things in later traditions. Thus, these stories created something like a mind map allowing the storage and transmission of essential information in a coded but easily readable form. In this way, not only historical events, but also significant astronomical phenomena and spiritual mysteries or initiations were preserved, and the whole myth functioned as a code that could be read on many different levels. 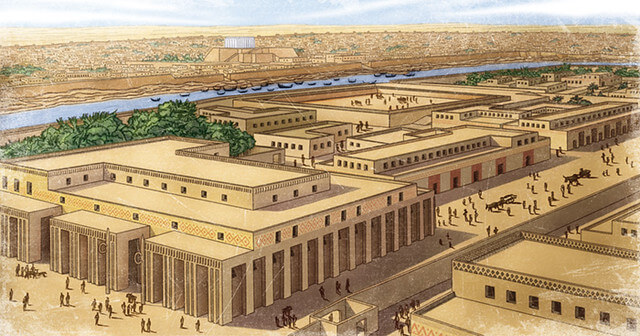 Illustration: Uruguayan temple of Eanna dedicated to the goddess Inanna.

The E-anna temple appears in another epic poem, Enmerkar and the Lord of Aratta. In this episode, part of the four-part "Uruck cycle," King of Uruk Enmerkar asks the goddess Inanna for permission to conquer the mysterious and distant land of Aratt, abundant with precious metals and precious stones that are so rare in the flat landscape of southern Mesopotamia.
“My sister (Inanna), let Aratta skillfully work gold and silver for me and my Uruk. Let him cut the lazurite without caries from the cobbles, Let… the translucent lazurite without caries… build a sacred
mountain in Uruk. May Aratta build a temple that has come down from heaven - instead of your worship, the sanctuary of E-Anna; may Aratta work the inside of the guitar, your tabernacle; I, a bright young man, could stay in your embrace. ”
This cycle, composed of four loosely connected epic pieces, describes the conflict between Uruk and Aratta, the reason for which is not only the wealth of mineral resources of the mysterious mountain country, but above all the favor of the goddess Inanna. Both the rulers, Enmerkar of Uruk and Ensuchkešdanna of Arrata, claim that they are elected by Inanna and are entitled to share a bed with her in a sacred marriage that entitles them to rule by the will of the gods. Inanna herself does not interfere in this conflict, just looks at him and occasionally gives valuable advice to Enmerkar, who is her chosen and secretly supported. In the first two parts of the conflict unfolds at the level of competition and armed clash occurs only in the third part, whose main hero is Uruck warrior Lugalbanda. He is ill on his way to Arrata and left by his comrades in a cave where he experiences a mystical experience on the brink of death and miraculously cures his illness. The content of the fourth track is Lugalband's return to the Uruck army besieging Aratt. While wandering in the mountains, he encounters an eagle, Anzu, who rewards him for taking care of his cub by making him the fastest runner. Lugalbanda reunites with his comrades, but finds that the siege is futile. Enmerkar, the commander of the siege, decides to send a quick messenger to Uruk to Inanna to help him. Lugalbanda offers, and due to its speed, timely message from Inanna, which Enmerkarovi reveals the location of a powerful weapon A-an-kar (translated weapon - heavenly strike). The end of the song glorifies the city of Aratt, but it seems to have been conquered, and its treasures and skilled craftsmen are heading to Uruk to build the dwelling of the sensual goddess and her earthly lover. 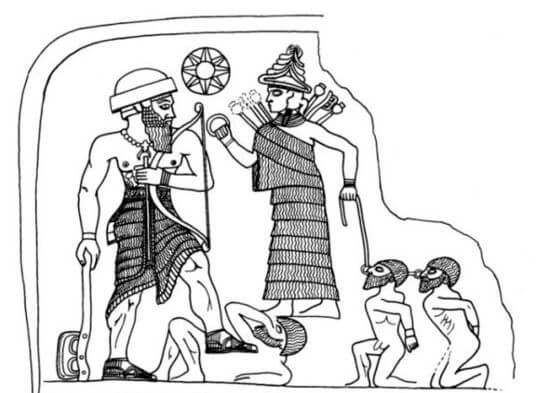 Anubanini's relief from present-day Iranian Iran depicting the goddess Inanna and the king.