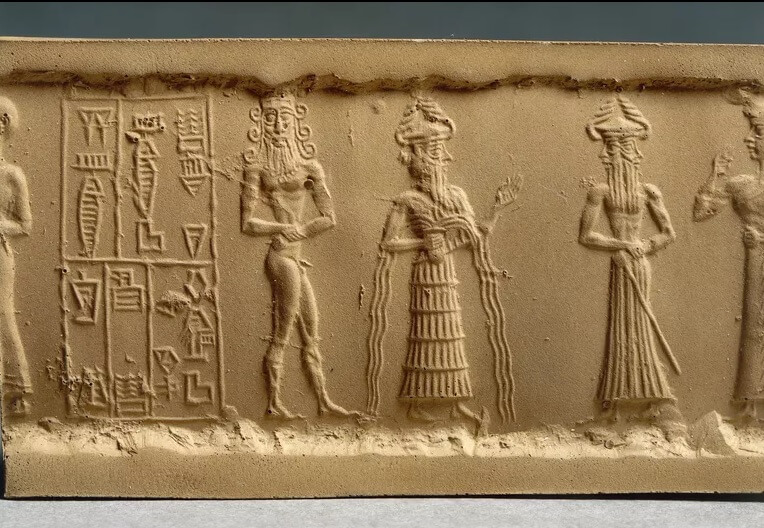 However, the temples, the dwellings of the gods described in the Sumerian texts, are not limited to flying machines descending from heaven. In the case of the temple of the god Enki, the wisest of the gods, we learn that his temple floated on the water, whether sea or wetland waters surrounding the city of Erid, his residence. It is the water element that accompanies Enki at every step. All myths about Enki clearly state that his residence was in Abz, perhaps the sea depth, which is often interpreted by sumerologists and asyriologists as a freshwater ocean between the earth's surface and the underworld. Perhaps this interpretation is influenced by the Akkadian myth of the creation of Enum Eli, in which Apsu is a personification as a freshwater ocean that mixes with the salt waters of his counterpart Tiamat, giving birth to the first generation of gods. Another Sumerian term for Abza is also engur, which, according to the Pennsylvania Sumerian Dictionary, means "(cosmic) groundwater." And Abzu can indeed be considered on a completely different scale than as an underground ocean or sea depth, namely the cosmic depth. The true seat of Enki would then be located in the depths of the cosmos, from where he would descend to Earth and land on the surface of the sea, similar to the already mentioned temple of Kesh. As support for this statement, one can recall the Akkadian myth of the creation of the world of Enum Eli, in which Apsu is acting as one of the basic primitives from which the universe is created and after its death or transformation, Enki established a dwelling there.

A dwelling whose foundations are in Abz 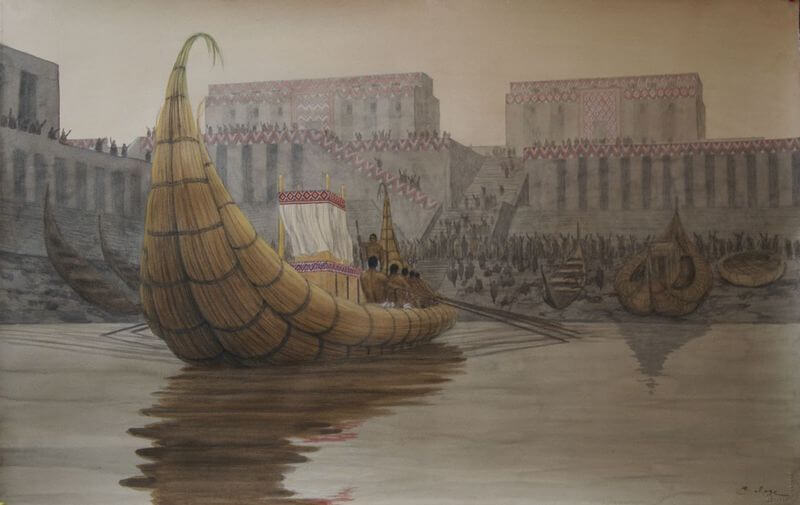 Illustration: Port of Erid, the capital of Enki.

To better understand the nature of Enki's seat, the text of the song “Enki and the Organization of the World,” one of the most important myths about Enki, can help. In it, the god, at the command of Enlila, first arranged the world and then divided the powers of the individual gods. However, this myth also contains valuable information about Enki's residence as such:
“Your big dwelling has foundations in Abz, the great anchorage of heaven and earth. I built my Abza, a sanctuary, in…, and determined a good destiny for her.
The text thus refers to Abza as the place of origin or source of power for Enki's dwelling, and at the same time denotes his shrine itself, as evidenced by the traditional names of the Sumerian temple in Erid, namely E-abzu and E-engura, or abzu house / cosmic water house. It should be added that some researchers associate Abza with structures found in South Africa, which are the remains of the gold mining of ancient visitors from the stars. Indeed, these structures are, according to Michael Tellinger, enormous energy generators that not only made it possible to extract gold on an industrial level, but were also used to transport the extracted gold to the mother ship by Anunna. This is also reflected in the term "anchorage of heaven and earth" used in that snippet, which can be interpreted as a teleportation or landing area.
However, the connection of Enki with water as such is indisputable and is repeatedly emphasized in all texts in which this god is present. This close connection is further supported by the fact that Enki's palace itself stood on the sea surface or below it, as illustrated in the following passage: The Lord has established a sanctuary, a sacred sanctuary, the interior of which is ingeniously built. He set up a sanctuary in the sea, a sacred sanctuary whose interior spaces are ingeniously built. The sanctuary, whose interior spaces are twisted yarns, is beyond all understanding. The foundations of the sanctuary lie near the constellation Field, the foundations of the sacred upper sanctuary point to the constellation of the Chariot. His terrifying sea is a swelling wave, his magnificence is scary. The gods of Anunna dare not approach her. … To refresh their hearts, the palace rejoices. Anunna stands in prayer and prayer. They erected a large altar for Enki in the E-England, for the Lord… the Great Prince… the sea pelican.
The description of the sanctuary as such evokes a very complex structure that was beyond the understanding of the people of that time. A structure so complex that it resembled a tangled yarn, a finished labyrinth. However, we also learn essential information about the orientation or cosmic alignment of Enki's residence with stellar objects. The first is the constellation "Field," known to us as the constellation of pegasus, and the second is a large chariot. The importance and uniqueness of the sanctuary is also emphasized by the fact that the other Anunna do not want to approach it, apparently without a previous call. Paradoxically, however, they figure like priests, if you wish, to the temple, who erect the altar and offer prayers. As in the case of Cache, Anunna is present directly in the premises of God's residence, which serve as their dwelling.

Temple of gold, silver and gems

The imprint of the sealing roller depicting the ship coming to the temple.

Enki's shrine is undoubtedly a breathtaking object. However, by reading the text “Enki's journey to Nippur,” it is possible to reveal its true nature in its absolutely detailed description, which finds parallels in other ancient texts of other cultures. The text of the poem begins after Enki has completed the construction of his stunning water sanctuary and went to Nippur to announce this fact to Enlil and properly celebrate his success with other gods, including the mighty Ana. A substantial part of it deals with the description of Enki's incredible water abode. Remarkably, he emphasizes some important elements of this building: “King Enki, Enki, the destiny lord, built his temple entirely of silver and glaze. Its silver and lazurite glowed in daylight. The Silver and Lazurite Palace sounds like an incredible structure, but such a description is not much different from other ancient descriptions of extraterrestrial flying machines that are made of brilliant metal gemstone, such as Ezekiel or Indian texts. Other parts of the text further enhance this possible connection:
"He built a precious metal temple, embellished it with glaze and covered it richly with gold."
Needless to say, gold is an essential raw material for any space flight, as it serves as the perfect insulator, superconductor, and shield against cosmic rays. It is also astonishing that the temple is said to make a sound:
“His masonry speaks and gives advice. His sheep roar like a bull; Temple of Enki moo. ‟
In addition, Enki's "talking wall" plays a central role in the story of Ziusudra and the Flood. With it, Enki gave Ziusudra a report of the impending disaster and instructions on how to save himself and thus all mankind. This detail is then taken over by the Akkadian tradition of the story of Atrachasis and Utanapishti, which are essentially a retelling of the story of Sumerian Ziusudra, whose original text, unfortunately, has been preserved only very fragmentary. Looking further at "Enki's journey to Nippur," we encounter a typical motif of water that is inherently associated with Enki:
“A temple built on the edge, worthy of the magnificent divine principles! Eridu, your shadow extends over the center of the sea! Rising sea without rival; a mighty awe-inspiring river that scares
country! ‟
“How it was built; how it was built; as Enki lifted Erida, it is a high-rise mountain floating on the water.

Imprint of the sealing roller with the motif of the boat.

Enki's departure to Nippur also reveals information about Anunna's technology, as it describes Enki's vessel that we would not expect in ancient Sumer:
“The ship sails on its own, with a mooring rope that herself. As she leaves the temple at Erid, the river bubbles for her master: her sound is the mooing of the calf, the moo of the good cow.
So we see here a description of something that looks like a motorboat or a boat. The ship seems to move by itself and its movement is accompanied by the bubbling of water and the sound of the engine. The ship is similarly described in the myth of "Enki and the organization of the world." It states that Enki travels by sea and visits distant lands, including the land of Melucha (the Indus River Basin) from which he brings gold and silver, and sending him to Nippur to Enlil.
The entire description of Enki's headquarters can be likened to a phenomenon, which is called the USO - unidentified submerged object. It is spoken and written primarily in the context of ancient cities below sea level or objects that are below the water surface and often leave the water and head for the heavens, as observed, for example, on Lake Titicaca, but also on other bodies of water. And it is precisely the water, the sea depth inhabited by Enki, and with him his faithful servants, the Abgal, Akkadian called apkallu, which their master sent to become a teacher of mankind, to whom they passed all knowledge of agriculture, science and art, Akkadian texts. Undoubtedly the most important of these abgalos is Adapa, who, after a conflict with the "south wind", was called to heaven to Ano himself to explain his actions to him. The path of Adapa to Heaven will be described in more detail in another episode of this series.