Flying temples, however, are not only described in ancient texts, but there are also depictions, especially on the sealing rollers of the ancient Akkadského period. It is a motif of a winged temple or winged door, which is one of the most mysterious motifs of engraved art from this period. The motifs on the sealing rollers usually depict a "temple" that is placed on the back of a bull kneeling in front of a person sitting on the throne. In the upper part of the temple there are wings on the left and right and lead from it up to four ropes, which hold persons carrying horned helmets on their heads indicating deities. The person sitting on the throne is also crowned with a horned crown and the scene is complemented by a depiction of a boat or plant elements. 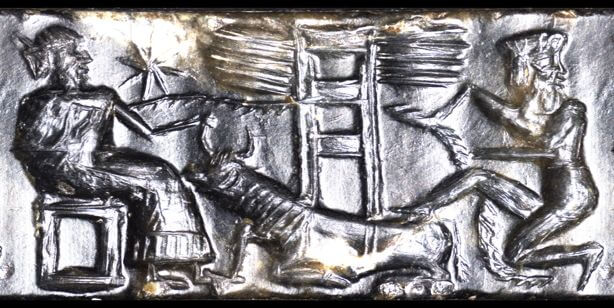 A sealing roller from the Akkadian period depicting a winged temple

Traditionally, the rectangular winged structure is referred to as a temple or gate based on similar depictions on older and later engravings and seal prints, but there are also opinions that it is a shell. As an example of older seals depicting the temple, there are some seals from the Uruck period (c. 3300 BC). Also possible are depictions of the seat where the gods sit on some scenes depicting the so-called "divine audience", which look similar to the facade of the temple displayed on the seals.

The importance of the ship's motif, which sometimes appears, can be directly linked to the processions of the gods. Many texts describe the gods who used to visit each other by boat, and in the composition of Nanna-Suen's journey to Nippur, the construction of such a boat is directly described. Reinhard Bernbeck, a German professor of assyriology, also links her with the journey to the underworld, which may be indicated by a sign indicating the singer of the psalms (gala) on one of the seals. But the motif of the ship can symbolize the heavenly barge of ma-anna on which the goddess Inanna flew, or Enki's mysterious boat, which plowed the waters of the seas and rivers. What is important, however, is that the entire composition captured on the sealing rollers of the Akkadian period gives the impression of moving the winged object upward toward the heavens, the seat of the Mesopotamian gods, the celestial beings. 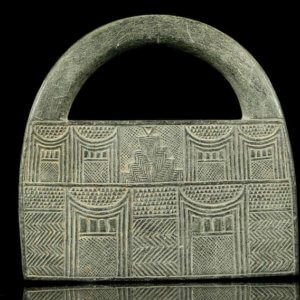 The object in the shape of a jiroft culture tile (Jv. Iran) depicting temple facades

Some scholars relate the winged temple motif to the myth of Etan, who ascended the eagle to heaven to obtain the plant of life and beget his successor. The motif on the seal might depict "the ascent of the ruler to heaven," which is described in some Sumerian texts. For example, an administrative table from the last year of King Shulgi's government states that when "Shulgi ascended to heaven," the slaves were freed from work for seven days. It should be emphasized that in the religion of ancient Sumer the place where the souls of the deceased went was located in distant mountains (Sumerian expression KUR means both the mountain and the realm of the dead) and in the tradition of the Babylonians directly underground. The ascension to the heavens must therefore have been an exceptional event reserved for the godly rulers who, either after their death or during their lifetime, joined the gods in the heavens. The problem, however, is that King Shulgi ruled during the period referred to as Ur III, some 100 years after the end of the Old Akkadian period. However, the first deified Mesopotamia ruler, Naram-Sin, comes from the Akkadian period, whose name has reached immortality thanks to the famous stele, which depicts ascending to a conical object above which three celestial bodies are depicted. Thus he may be the first king to ascend to heaven and be accepted into the community of gods. The question remains, what role did his conical object play in his ascension to the heavens, which, although experts consider it a mountain, could in fact represent a cosmic capsule of ancient star visitors. 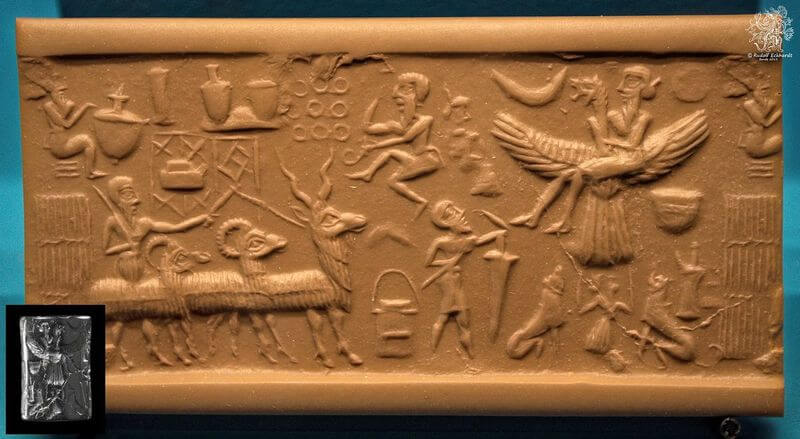 Thus, the depicted wing box or building may represent the means by which the ruler went to heaven. It is reasonable to assume that the traditional Sumerian society also commemorated this event in the form of a ritual, and the representation on the seals depicts such a ritual. Mesopotamian rulers and heroes ascending to heaven will be discussed in more detail in a separate section of this series.

It is clear from the examples of flying temples that the idea of ​​Indian flying cities and palaces called Vimany is not unique in ancient literature. On the contrary, I believe that, in more detailed study of the texts of other nations, we can find similar references as in the Indian and Sumerian literature. The following episodes of this series will focus on records of the descent of the gods themselves from heaven to earth and flying in smaller machines.