UFO, which was seen in Lake Tahoe in the USA in unprecedented detail, "100%" is proof of that aliens are visiting Earth. Observation was described as a "classic" spacecraft. They described it as enthusiasts in the theme of aliens who claim to be a flying saucer.

Tourists at Lake Tahoe in Nevada saw the UFOs approaching the sky and were lucky to have them captured on the video. The flying saucer moved so fast that it was hard to see on the video, but some eagle-eye experts slowed her to get a better look.

The unnamed person who shot this video said:

"We went to Lake Tahoe for a vacation and set off on a boat to ride on the lake. I did not see the subject until we got home when I checked the video, and this object appeared at the speed of the video. "

Some UFO experts are so convinced about the authenticity of the video that they believe it's just a matter of time before aliens are revealed to people. 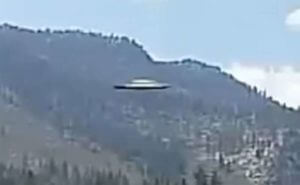 "This is a classic flying saucer, a beautiful metal disc with the raised top of the dome. This is 100% evidence that aliens are watching a person close and personal. "

However, some people were not so convinced about the authenticity of this video and rated it as fake.

"It looks like a small tiny small boat that is not in the right range of the field."

Prior to this observation, clear UFOs were also observed south of the border in Mexico City. Because the UFO moves air several hundred yards above the ground, it emits a blurred field that is often reported by enthusiasts.

We bring the testimony of the Roswell incident