Shamanism is considered to be the oldest form of expression of spiritual practices and ideas widespread, at one time or another, throughout the world. This is confirmed by archaeological findings, especially exceptional burials equipped with unusual artifacts that can be directly linked to the ceremonies and customs of the Siberian tribes or indigenous people of South and North America. Elements of shamanic traditions are also reflected in some contemporary great religions, such as Tibetan Buddhism or Japanese Shinto, but according to some interpretations they can be found in the Judeo-Christian stories of Moses or Jesus. How far do the roots of these ancient traditions go?

The face of a shaman from Skateholm

Thousands of years ago, a woman was laid down for last rest, undoubtedly enjoying unusual respect in the society of that time. Her unique funeral really confused the researchers' heads. The dead in the grave sat cross-legged on the throne of antlers, a belt of hundreds of animal teeth adorned her hips and a slate pendant hung on her neck. The woman's shoulders were covered with a short cloak of feathers of different bird species. This funeral, marked by archaeologists as "Tomb XXII", was uncovered in Skateholm, South Sweden, at 7. years 80. century. Today, thanks to the effort and skill of Oscar Nilsson, a face reconstruction expert, we can once again look into this mysterious evil eye. According to the bones, the experts determined her height at approximately 20 meters, and she caught her at the age of 1,5 to 30 years. 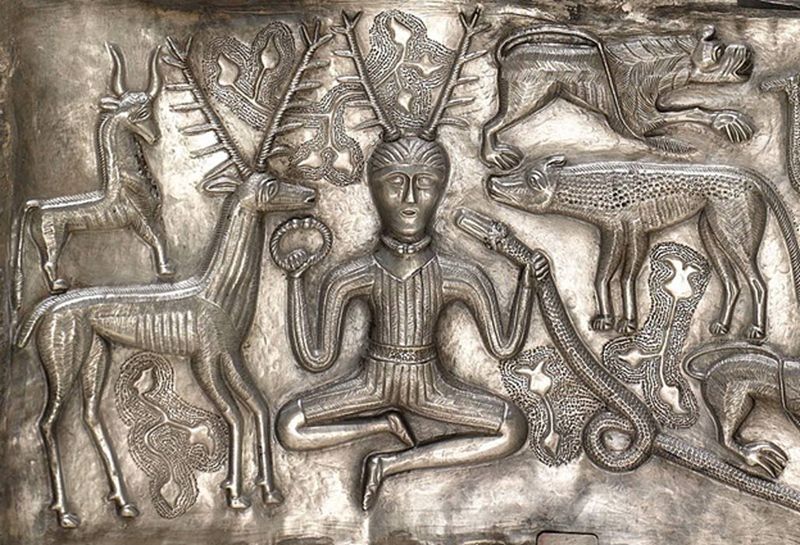 DNA analysis revealed that she, like most people of European Mesolithic, had dark skin and light eyes. Her grave was one of the 80 uncovered at the burial ground in Skateholm between 5500 and 4600 BC and was not the only one unusual because there were funerals of people with dogs and single dogs equipped with rich charity. It was not just the unusual nature of the funeral that led archaeologists to interpret a woman as a shaman. Its equipment for the last trip directly reflects the still functioning shamanic traditions. Remarkable is her "throne" of antlers. Horns and antlers serve in the shamanic conception of the world as a kind of antenna ensuring connection to the world of spirits. Horns or antlers also boasted mystical figures connected to the animal world, known for example from a depiction on a cauldron from Gundestrup from Denmark or from a seal of Harapp culture with the motif of "Pasupati," the lord of animals. In the culture of the Siberian Ennets, the horns are sabers, which they fight against evil spirits, and in other tribes they provide a connection with protective spirits.

The bird feather cloak that covered the woman's shoulders was "sewn" from crows, magpie, gulls, jays, geese and ducks. Birds in the concept of the world of natural nations represent psychopaths, a guide to the soul. In particular, waterfowl, by virtue of their ability to dive, float and fly, express the connection of the lower and upper worlds; the world below the surface and the world high in the clouds. During their ceremonies, the Siberian Evenks dressed in bird feathers turned into birds so that they could ascend to the heavens. Given that the traditions and symbols of shamanism have been universal and unchanged for millennia, even the bird feathers of the Skateholm lady could have helped her magical years, including the last.

Another notable grave of a shaman was found in 2005 in a cave called Hilazon Tachtit in western Galilee in the north of Israel. In the cave that served as the burial ground of local communities, 13000 people were buried in the period of Naturh culture (9600 - 28 BC). One of these graves was very unusual in the complexity of the funeral ritual and in exceptional charity. The woman stored in it was about 1,5 meter high, died around the age of 45 years and suffered from pelvic deformity throughout her life - a disability that apparently destined her to be a shaman, as it is not uncommon for shamans to become just mentally or physically disabled people. Bones of various animals were arranged around her body: a marten skull, a wild cow's tail, a boar's forearm, a leopard pelvis, an eagle's wing, and a human foot. Her head and pelvis were lined with a turtle shell, and at least 70's other carapace, the remains of a funeral feast, were placed around her body. 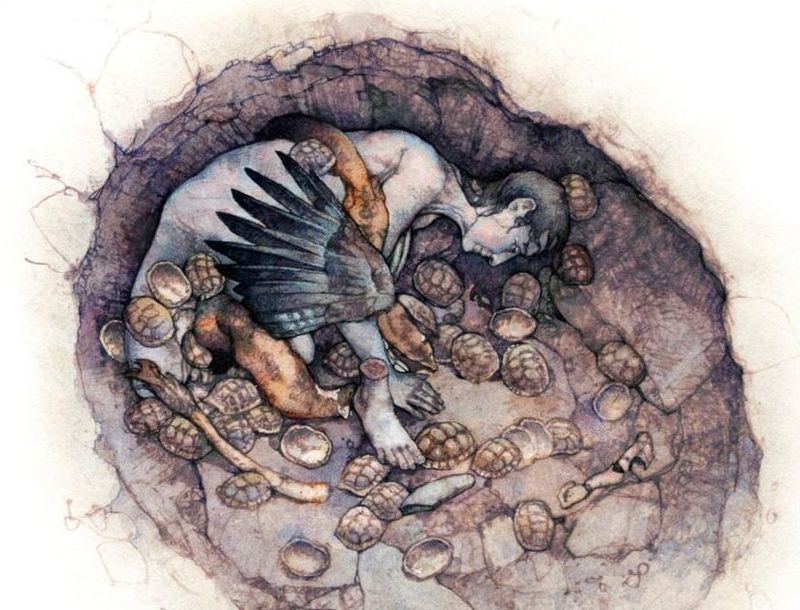 Reconstruction of the grave of a shaman from Hilazon Tachtit. Source: National Geographic

The whole funeral included, besides the banquet, a very complex six-stage ritual. In the first part, the survivors dug an oval pit into the cave bed and covered its walls and bottom with a layer of mud. They then paved the grave with limestone blocks, scraps of mussels, bone cores of gazelle horns, and turtle shells, which they covered with a layer of ash and stone chipped tools. The fourth part was the deposition of the woman for her last rest, to which she was equipped with the above mentioned turtle shells and animal sacrifices. They were then covered with limestone slabs. In the fifth phase, the grave was covered with remains of a funeral feast, and in the sixth phase the grave was closed with a large triangular block of limestone. The whole process was carried out with due respect and care and expressed the importance of the person buried in this cave. In addition to the woman's serious disability, it was the animal remains that led the archaeologist Leore Grosman of the Hebrew University of Jerusalem to interpret the funeral as a shaman.

Shamans are in close contact with animal spirits and animals are an important partner for them, not just a mindless part of the surrounding nature, potential food, or even property. The choice of animals with which a woman was buried was certainly not an accident. It could be her protective spirits or guides, and symbols of her position. In particular, the eagle and the leopard are among the animals that are strongly associated with shamans due to their strength and abilities. In the original cultures, various animal masks or disguises are used during rituals to communicate with the animal spirit or transform itself into an animal. There are stories from South America about wizarding nahuals who can take the form of a jaguar. For example, a statue from the ancient Mexican Olmec culture depicts one of these nahuals. Similar are the stories of European werewolves or the cult of Nordic berserku, fierce Viking warriors dressed in animal skins. From the old continent is also known paleolithic wall painting "wizard" from the French Cave of three brothers depicting men in the stage of conversion into a deer, or even 40 thousand year old mammoth statuette of a lion man - a human figure with a lion head from German Hohlenstein. The collection of various representatives of the animal kingdom who accompanied the woman on her last pilgrimage also evokes the notion of the Lady of the Beasts known from prehistoric and ancient depictions.

The Olmec statuette nahual transforms into a jaguar

The author, Wolf-Dieter Storl, explains the structure of shamanic rituals based on numerous examples from America, Asia, Australia and Africa. Above all, however, it is dedicated to the ancient tradition of European forest nations, the Celts, the Teutons and the Slavs, who have long been forgotten. 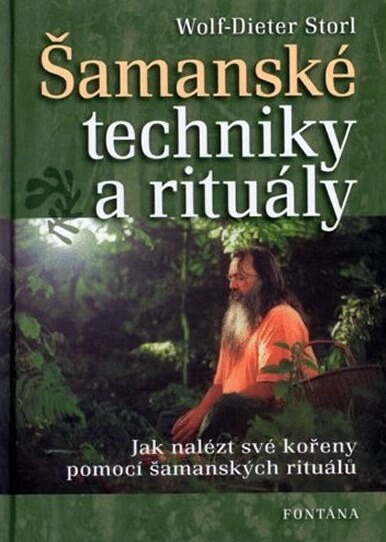