The new study, published by PLoS, has now scientifically confirmed what has already been experienced by many of the group drumming participants. That group drumming causes major changes in personal well-being, including a positive impact on depression, anxiety, and social inclusion.

The World Health Organization identifies depression globally as a major cause of incapacity, while psychopharmaceuticals have severe side effects including permanent blocking of body self-healing mechanisms. An alternative drug is currently highly needed. Could it be a group drumming?

British Scientists Study, entitled " Effects of group drumming on anxiety, depression, social adaptability, and inflammatory immune responses in psychiatric clinics"She followed a group of about thirty adult patients who had already undergone mental health treatment, but did not take antidepressants. Part of the patients participated in a ten-week group drumming program, the second, a control group of fifteen patients was treated classically. Both groups consisted of patients of the same age, gender, ethnic origin and occupation. Control group members were informed that they were involved in a study on the impact of music on mental health, but had no access to drum exercises.

The members of the target group that had 15-20 participants were drumming once a week with 90 minutes for ten weeks. Everyone got traditional african djembe drum and was seated in a circle. Twenty percent of the time was devoted to theory, and eighty percent to playing the drum. Patients in the control group were recruited from collectives according to social activities (eg quiz nights, women's meetings and book clubs). In both groups, biomarkers related to immune system status and inflammation, such as cortisol and various cytokines, were monitored for biological and psychological changes associated with the intervention.

The study results were remarkable:

"Unlike the control group, significant improvements were found in the drumming group: to 6. Week There Was A Reduction In Depression And Increased Social Resilience And These With 10. week continued to improve, along with significant improvements in anxiety and wellbeing. All significant changes persisted after the next 3 month tracking. It is already known that many mental health problems are characterized by basic inflammatory immune responses. Therefore, participants in the drumming group also provided saliva samples to test cortisol and cytokines interleukin (IL) 4, IL6, IL17, tumor necrosis factor α (TNF α), and monocyte chemoattractant (MCP) proteins 1. During the 10 weeks, these factors shifted from the pro-inflammatory to the anti-inflammatory immune profile. This study demonstrates the psychological benefits and biological effects of group drumming as well as its therapeutic potential for human mental health. 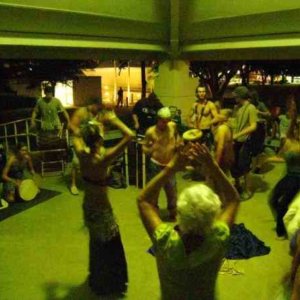 In summary, the 6 weeks drumming group experienced a decline in depression and increased social resilience; 10 weeks followed by further improvement in depression, along with significant benefits in anxiety and wellbeing. These changes persisted for the 3 months of follow-up. The drumming group also recorded a change in the immune profile from the pro-inflammatory to the anti-inflammatory response of the organism.

This remarkable research suggests that group drumming can provoke positive psychospiritual changes beyond mere suppression of symptoms, unlike conventional psychopharmaceutical treatments (eg Prozac) in addition to no side effects. The findings of this research study are even more promising if we consider that the benefits associated with conventional pharmaceutical treatment for depression can actually result not from the psycho-drugs themselves, but from the placebo effect. Additionally, antidepressants can cause serious side effects, including suicidal thoughts.

Another important discovery of the study is the reduction of inflammatory factors in the immune profile of participants in the drum group. Can inflammatory dysregulation be a major cause of a wide range of psychiatric disorders, and anti-inflammatory interventions to address them? This is precisely the thesis that Dr. Kelly Brogan in his new book "Your Own Mind: The Truth about Depression and How Women Can Heal Their Bodies to Resurrect Their Lives". The book addresses the key physiological role of inflammation in conditions such as depression, bipolar disorder and anxiety. Combining inflammation-depression explains in particular how curcuma formulations are clinically more effective than conventional antidepressant drugs (eg Prozac), probably due to the wide range of effects of turmeric and its systemic anti-inflammatory properties.

Drumming as an ancient method of treating mind, body and soul

In the previous article, "6 Drumming Treats Body, Mind, and Soul," I reviewed the published scientific literature on the therapeutic potential of drumming and examined some of the possible evolutionary origins of this old method. It is fascinating to realize that insects are also drumming, and that human speech itself can come from this primordial gesticulation that is present almost everywhere in the animal kingdom. In addition, sound waves (percussion) can carry biologically significant energy and information with epigenetic significance. Drumming could therefore be considered a form of 'information medicine'.

While scientific knowledge about the therapeutic value of drumming is still growing and more and more convincing, it may not be necessary. The most important thing to remember is that Drumming is something that one has to experience directly to fully appreciate and understand it. There are hundreds of community drumming circles throughout the country. They attract people of all ages, social classes, life experiences and are open to newcomers. Those who know them intimately know that the only thing needed here is the rhythm of the human heart because of the rhythm of the drum and this ancient rhythm in your chest is essentially one and the same.

Disclaimer: This article is not intended to provide medical advice, diagnosis or treatment. The views set forth herein do not necessarily reflect the views of GreenMedInfo or its employees.

"Music and rhythm find their way to the most hidden places of the soul." - Plato

Where I come from, it is said that rhythm is the soul of life, because the whole universe rotates around the rhythm, and when we lose the rhythm, we get into trouble. - Babatunde Olatunji

“Rhythm is the heartbeat. It's the first drum, a sound story that reveals our imagination and celebrates our power. Rhythm is a multicultural common human family base. - Tony Vacca

Want to drum together? Come among us at Spontaneous drumming - every other Thursday in Tearoom Shamanka on IP Pavlova.

If you want to have fun at home or with friends in the countryside, you can buy your own Djembe drum on Suenee Universe eshop:

Numerology and its importance

Very effective technique for activation of the third eye