Have they seen UFO artists?

Did the ancient artists leave clear signs that our lives and culture were influenced by visitors from other worlds? Works of art can be considered as historical cultural and scientific records, as they depict man in many forms, providing a more complete picture and a unique point of view. From the beginning of mankind, people have felt the need to portray celestial phenomena and events, first on the walls of the caves and later on the canvas. It does not mean that the works of art reflect history, archeology and anthropology, but looking at this interpretation should allow for new elements whose existence has not yet been anticipated. Much has been written about the portrayal of strange objects in the heavens in Renaissance works, but little is written about some medieval tapestries and frescoes - and what is talked about is considered controversial because it does not reflect an orthodox view.

Notre Dame Basilica is located in the small town of Beaune (the center of the Burgundy wine region) in the department of Cote d'Or in eastern France. The original building was built between 1120-1149 years. Inside with the frescoes of 15. century, there is a library that stores a collection of tapestries from 15. to 18. century. Among them, two medieval tapestries capture two of the five significant moments of Virgin Mary's life. On both tapestries there is an unidentifiable flying object flying in the sky in the background. Even on the "Magnificat" tapestry made in 1330, this black object is portrayed in a manner typical of UFO sighting. But many argue that these are priest hats. 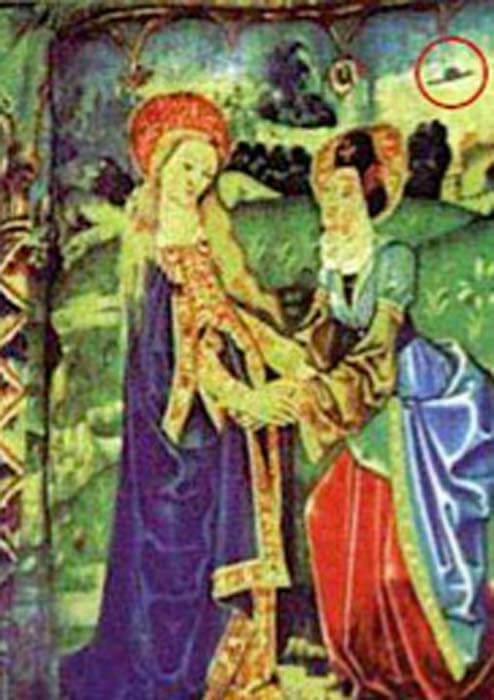 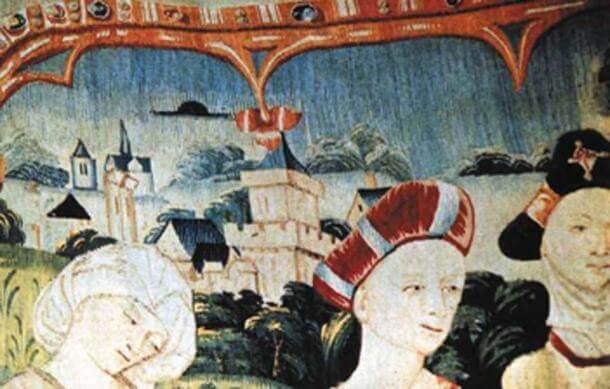 But there is a logical question: why were church hats portrayed as they fly in the sky?

It is therefore justified to consider whether, due to the historical period, the author was not influenced by his own experience or folk tales and subsequently depicted this unusual event in the form of a holy image, perhaps with the hope that it would enhance the mystical aura of the work. However, works of art also capture discs or UFOs that cannot be mistaken for "priest hats" - even if they do not fly in "religious heaven." A good example is the tapestry "The Triumph of the Summer" depicting allegorical and symbolic representations of this time of year. This tapestry was undoubtedly part of a series of works of art that spanned four seasons. It is not known if any of the other tapestries have been preserved. This tapestry (perhaps created in Bruges) is located at the Bayerisches National Museum in Munich, Germany, but has little information about it. 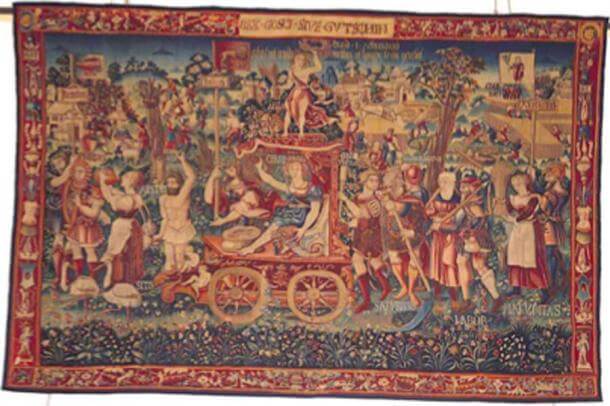 It is known that it was acquired for the museum in 1971 by an art dealer. It has no information about the workshop, the creator, the cartridge or the circumstances of its production. The 1538 date is embroidered on the right and left edges of the tapestry. There is a Latin inscription at the top that reads: "REX GOSCI SIVE GUTSCMIN." This can be translated as "King Gosci of Gutscmin." If it is to be a reference to the patron who commissioned tapestry production, no one can say for sure. As usual, black disks or UFOs are almost undetected in the background in the blue sky. Dr. Brigitt Borkopp of the Bayerisches Museum stated in a letter to the author of this article that “Since the style of this tapestry is somewhat unusual for its time, I do not think it is a good subject to illustrate the history of art, but of course I leave it entirely up to you ‟Of course, she did not know that the link between UFOs and history was described by a number of books and articles. It is interesting to note that strange or unusual works of art are generally not examined by 'professionals' who prefer to ignore them.

A remarkable example depicting “knowledge that has been ahead of time” is considered to be a depiction of two crusaders from the “Annales Laurissenses” (books on historical and religious events) written at the beginning of 8. Century. In 776, a strange phenomenon occurred during one of the numerous Saxon invasions of Frankish territory. When, at a rare time, Charles the Great did not fight and deal with the affairs of the Holy Church, the Saxons and the great army left their territory and invaded the Franks. They reached the chapel in Frisdilar, founded by Saint Boniface, a preacher and martyr who predicted that the chapel would never be burned. The Saxons surrounded the chapel, burst into it and set it on fire. But at the last moment two men dressed in white appeared in the sky.

They were seen as Christians who were hiding in the castle, and the pagans who were before him. These two men are said to have protected the chapel from fire. The pagans couldn't burn it either from the inside or from the outside, and fled in terror - even though no one was following them. But one of the crusaders remained in front of the chapel during the rapid retreat and was later found dead. His dead body rested on his knees and elbows, his hands covering his mouth and all pointing to death by suffocation. Witnesses saw the fire. He did not damage the chapel, but killed the crusader who stayed with her while the others fled. This event can be interpreted in different ways and may not be considered essential unless it is followed by another strange phenomenon in a short time. 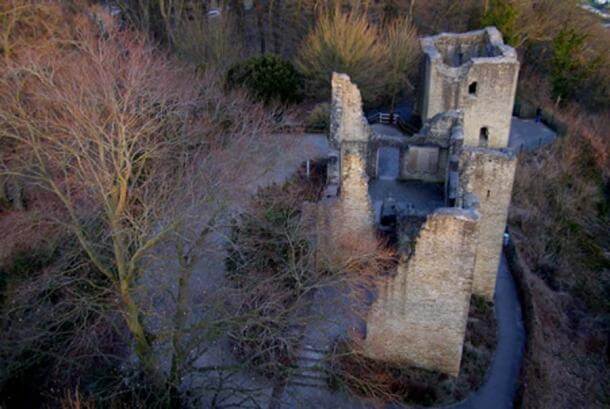 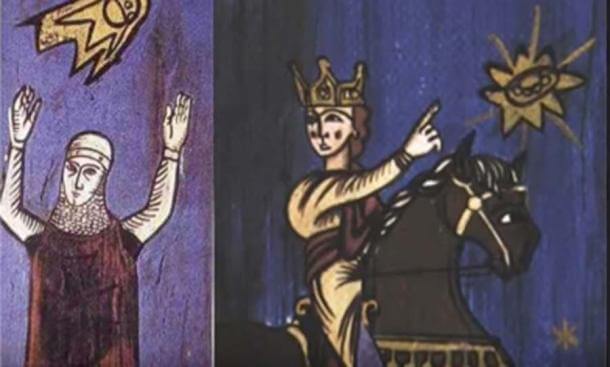 It happened in 776 during the siege of Sigiburg Castle. The Saxons surrounded and besieged the Franks, but even under these circumstances, the Franconian crew managed to sneak out of the castle and invade the Saxons in the back. The Saxons were not protected at all because they focused on the siege of the castle. Something appeared in the sky during the fight. Witnesses saw two shields burning in the air shortly after each other. They hovered over the church as if the ghostly knights carried them to battle. Thanks to this miracle that the Franks seemed to have heavenly protection, and because of the Frankish attack on the Saxon rear, the Saxons fell in dismay and fled. This latter event has been preserved not only in chronicles, but also in pictorial form depicting two crusaders. On the miniature there is a crusader with arms raised, above whose head there is a ball-shaped object in the sky with a series of small rings like windows. It is worth noting the representation of the light or energy emitted by this object, which seems to indicate the direction of movement. It is only by looking closely at this picture (left) that it is possible to understand the author's attempt to express perspective - but this has not yet existed in this historical period. The images were created in only one plane and acted as a surface. Looking at the second image (right), depicting a crusader with a crown on his head (perhaps a nobleman or Charles the Great himself, although the chronicles do not indicate that he was present) riding a horse and pointing at an object in the sky, September can be nothing but an unidentifiable flying object - as we can confirm, according to witness statements and available pictorial documentation.

Another unusual flying object is located on a magnificent miniature in the Urine Bible from the Renaissance. The manuscript is kept by the Vatican Museum and is the most famous transcript of the Holy Scripture. The Urbinate Bible (or Bibbia Urbinate) is divided into two books, the Old Testament and the New Testament. This work, commissioned by Frederico da Montefeltro, Duke of Urbino, appears to have been written by Hugo de Cominellis (or Hugues de Cominellis de Mazieres). It was written in the workshop of Vespasiana da Bisticci, a famous Florentine bookseller who was the main supplier of manuscripts for the library in Urbino. 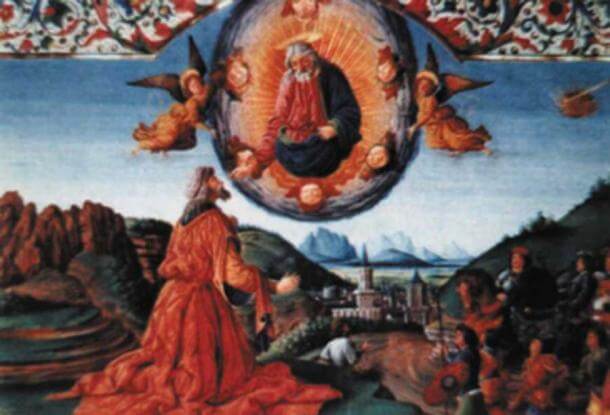 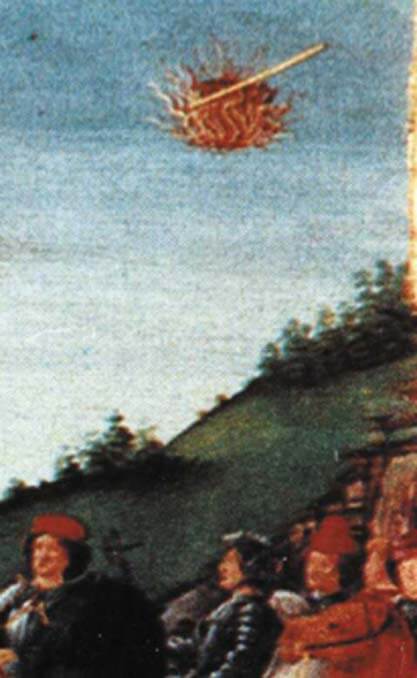 The manuscript is a description of the canonical text

Vulgate - an important text translated in 390 CE by St. Girolam of Hebrew and Aramaic. Many artists, altar painters, frescoes and miniatures, have worked together to decorate this work. The Urbin Bible is a rare example of the collaboration of Florentine artists of the late 15. stol. Among these beautiful portraits of the Bible is the subject of this article - The Contemplation of Saint Geremy. The illustration is a great example of a combination of mystical portrayal, an unusual phenomenon, and everyday reality. It captures mountains, the surrounding countryside, the city and people and horses as a representative of objective reality.

It also captures the divine mystical element of the classical expression of religious iconography. What we are interested in in this picture is an unusual object in the upper right corner. It is a round body radiating beams. A direct beam of yellow light (laser?) Emanates from the flames surrounding the object. Perfectly straight lines are not common in nature. In this case, the object clearly does not fit into a religious context. However, the direct rays emanating from flying objects are not unknown to ufologists. In the case of this miniature, no analysis will show whether its author actually saw or heard about it, but one thing is certain: he wanted to tell us something.

It is unlikely that today's observer of a flying object exhibiting advanced features such as unusual shape, movement ability, maneuvering, or radiation would, as the Saxons before, think that this is a sign of divine protection. Thanks to our technical knowledge we immediately think that it is a secret military aircraft or even an alien machine. Even the Franks, though not aware of aviation technology, did not think it was just a celestial phenomenon, but saw something more: "as if the knights were carrying them into battle. Tedy So ​​it can be assumed that two discs were controlled" Knights who wanted to take part in the battle. Was there an intention to change the outcome of the fight? Or was it just a coincidence that the two glowing discs appeared at that moment? However, these two events cited in the chronicles influenced the outcome of two significant attacks by the Saxons, the pagans at the time. So it seems justified to consider whether these battles, during which UFOs were observed, were so important for the still-forming empire of Charles the Great, the propagator of Christianity. What was the importance of repelling the Saxons? How significant was the victory of Charles the Great? And if the Saxons won, what would the world look like today? Could the development of our civilization, and as a result of our current political-social structure, be "managed" since ancient times? And why?

Extraterrestrial entities and technologies, reverse engineering. Exopolitika is a field that examines the people and institutions that are involved UFO phenomenon and presumption of of extraterrestrial origin of these phenomena. Check out the results of the research of the author of this book, who is the leader exopolitics in USA. 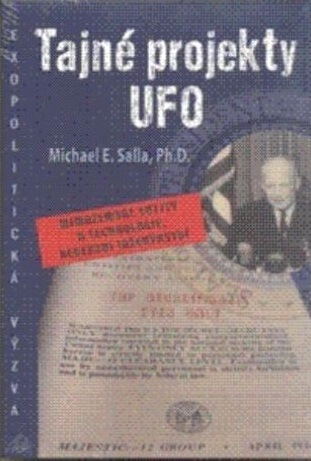