The Secret Doctrine of the Dogons

Dogoni who are considered to be descendants of aliens from the Big Dog's constellation, from the Sirius system, inhabit part of the territory of Mali. The priests of this tribe have been preserving for thousands of years a very detailed knowledge of the organization of the Solar System, the four stars of Siria, the Big Bang, and the subsequent evolution of the universe.

But where did these knowledge come from people who still live in almost prime society?

Dogoni - what are the good low ceilings

The tribe's name comes from the Europeans, the English Dog Star, a Dog Star, and marks the incoming from the constellation of the Big Dog, whose brightest star is Sirius, otherwise the Dog Star.

Dogoni live in small clay huts built close to each other. The special construction of the village is the toguna, which serves as a counseling point for men in solving various problems. Toguna has a very low ceiling that does not allow it to stand up in full and argue with "fists".

Another separate building in the center of the village is the dwelling of a leader (hogone). After being elected to this position, the hogon is obliged to leave his family and live alone. He is considered a spiritual leader and a teacher, he values ​​him so much that no one is allowed to touch him.

Dogoni are not such a small nation, they are roughly 800 thousand and speak several very closely related languages. They deal with agriculture, grow mainly maize and legumes, they also keep sheep, goats and hens. They work together in fields, and the harvested crops divide among themselves according to the number of members in the family. Some of the Dogons are engaged in craftsmanship, blacksmithing, pottery making, leather production, and products from them, they live in a separate group, and marriages between them and farmers are forbidden.

To the beginning of 30. years of the last century Dogoni were basically isolated and lived in a hard-to-reach place in the middle of the mountains, on the narrow terraces where they have their dwellings. This was the reason they managed to preserve their own unique culture for millennia.

Their calendar is fundamentally different from other ones that have the basis of the monthly cycle and the seven-day week (quarter of the lunar month). Dogoni have a week of five days and the last day is the day of rest. Their biggest holiday is called Sigi and celebrates once in 50 years.

However, every year, this holiday commemorates the des Masques (again the European title), which lasts for a whole week, five days. The main program of the celebration is the dances of masks that tell the history of the Dogons. They use large wooden masks in ritual dances. They are 80 species, showing both humans and animals, and each one has the appropriate costume in which the dancer represents a specific figure.

Dogoni believes that these ritual dances connect the world of the dead with the living world and are the "gateway" for communicating with ancestors. Masks are sacred and must not be worn either by women or by strangers. Men who dance in women are often used to emphasize the very important role of a mother in their tribe. After the feast, the masks return to a place known only to local priests.

The Dogon tribe was discovered in the 1931 for the civilized world by French anthropologists Marcelo Griaule and Germaine Dieterlen. In their travels to Africa, they encountered an unknown nation, and to study it, there were still another 10 years.

In their work, scientists devoted themselves primarily to the description of Dogon's life and culture, and in 1950 they published an article about Dogon's knowledge in the field of astronomy. This article has become a real sensation.

For comparison, we will provide some information. In 1924, Edwin Hubble proved that spiral nebulae are made up of stars. In 1927, scientists succeeded in determining the rotation speed of our galaxy, and 1950 found that it also had a spiral form. 1862 astronomers have discovered that Sirius is a binary, and currently assume that the Sirius system consists of four space bodies (which are still the subject of controversy).

And, surprisingly, it turned out that all these new findings were already well-known early Dogon companies! Their priests have detailed information about the universe, the solar system with its planets, and the circles surrounding Suria. Dogoni does not know the script, and all the sacred knowledge of the tribe is delivered orally and also "written" in rock paintings.

In the territory inhabited by Dogony, whose center is Bandiagara plateau, there is a huge cave with wall paintings, the youngest is about 700 years. At the entrance to the underground is always the protector of the sacred place and the initiate. His livelihood is a tribe and, like a hogan, it is forbidden to touch this man. After the guard's death, another guru took over protection.

Cave paintings contain incredibly accurate astronomical knowledge. More specifically, Saturn's rotating rings are the orbits of the planets of the Solar System, including Neptune, Uranus, and even Pluto. The most interesting paintings for us, however, relate to Sirius, according to which Sirius consists of four stars, and one can also see on the drawings that one of them exploded many years ago.

Relatively recently, scientists have been able to calculate the circulation time of Sirius B's white dwarf around Sirius A. At the same time, it has been shown that the orbital period is almost 50 of Earth Years (50,1), which corresponds to the periodicity of the celebrations of the Dogon Sigi.

Dogoni - mystery of the ancient telescope

A story is also displayed in cave paintings the arrival of visitors from space on Earth. One of the drawings shows a flying machine in the form of a plate that landed on Earth and stands on three supports. Here, we see the creatures in the suits that stand out, are like lizards or dolphins and talk to people.

The Dogons call visitors to Nommo and are convinced that the aliens not only passed their knowledge, but also married local women. From these bundles the children were born, and so the human and extraterrestrial blood was mixed.

There is still a deep lake in the sacred cave above which the direct "east" is on the surface. This hole is a part of the starry sky, if we stand in a certain place, the water level will act as a telescope mirror pointing to Sirius. How could ancient people "make" such a telescope is a mystery for us, but with its help it is possible to observe the stars and planets of Siria. 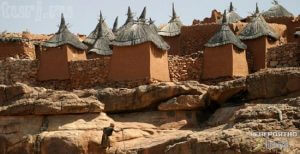 According to Dogon mythology, two planets were circulating around the third star of the system. One of them, Ara-Tolo, lived a reptilian Nommo and the other, Ju-Tolo, inhabited the race of rational birds Balako. Their scientists came to a point at the time that the nearest star, Sirius B, would explode, destroying both civilizations.

Nommons and Balaks sent out several interstellar reconnaissance expeditions and searched for the right planets to live. When the Nommees landed on Earth, they found that the planet was fit for their needs, secured offspring on Earth, and flew home to inform their nation. On their planet, however, the disaster has already taken place. The orbits of Sirius stars came close to each other and Sirius B had an explosion that destroyed all life on the surrounding planets.

Destruction of the Star Homony Dogoni reminds each 50 flight, when the stars of Sirius approach each other, celebrating their biggest holiday, Sigi, the Day of Death of the Dead Ancestors.

For Dogons, their mission is to protect the knowledge given to visitors, and not to join aliens in order to remain offspring of aliens and be able to re-become Nomads and resurrect star civilization. According to the priests, survivors of the Nommas who are on other planets will one day return to Earth and all the Dogons will take off with themselves.

The legends and paintings of this tribe are attributable to many hardly believable skeptics, talking about coincidences, inaccurate translation of oral submissions and the fact that present knowledge could hand over the Dogons to missionaries working in Africa ...

Some scientists, including Eric Guerrier or Robert Temple, the author of the Mystery of Sirius, admit that in ancient times aliens landing in Africa

An important American astronomer, Carl Sagan, is convinced that extraterrestrial evidence can be artifacts in the form of objects or devices that are not terrestrials capable of producing due to their level of knowledge. Likewise, it may be the knowledge that primitive people could not do. And it is very likely that Dogon's knowledge confirms this theory.

One comment on "The Secret Doctrine of the Dogons"