Trump does not believe in the existence of a UFO, but does not exclude it

If you are wondering what US President Donald Trump thinks of the existence of a UFO, you can now get some idea. In an interview with Tucker Carlson of Fox News Channel, he said he did not believe in the existence of UFOs and unidentifiable flying objects. When asked what he thought of UFOs reported by Navy pilots, he said:

,, I do not want to comment on this much. I personally doubt it. ”

This is how President Trump expressed himself after being informed about Pentagon observations. And it is the pilots who, under oath, claim to have seen special objects.

"It's a strange world to believe in such a thing."

Does President Trump suggest that people who do not deny the existence of a UFO and are in favor of this idea are somehow different from others? Is there reason to believe them less than other people? Thus, Carlson asked the president to comment on the existence and observation of UFOs in his own airspace. UFO witnesses followed President Trump's plane during his campaign and twice on his inauguration day. The next four observations were reported on President Trump's golf course in Scotland in 2018. Didn't the president want to know more about these observations? 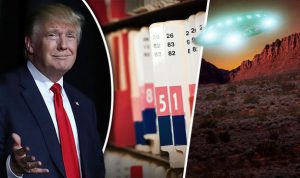 Would he possibly believe in a report or confirmation from that "special world", that is, the people who deal with the UFO phenomenon? So Carlson reminded the president that the US was hiding several UFO wrecks on base. In the past, several UFO accidents or shooting downs have been mentioned.

The President expressed himself as follows:

So the President officially denies and excludes the existence of a UFO, although several navy pilots risk their career with their statements. So even these high-ranking navy members can be included in a "special world". But can we divide the world into groups? Those who believe and do not believe?

In early July, 1947 was shot down by three alien ships near the Roswell military base. This was followed by the discovery of the existence of dozens of extraterrestrial species and their technologies, which became an imaginary Rosetta plate for the discovery of a new generation of free energy resources and propulsion systems that could travel across galaxies without any pollution.