We're all a little mage

Who were they? magicians? In the prehistoric epoch, and even in historically ancient cultures, there was no precise boundary between magic and religion.

In the consciousness of our ancient ancestors, the world was ruled by light and dark spirits (deities). To gain their favor, or to protect themselves from their wrath, the knowledgeable people performed magical ceremonies and rituals. Magic was said to exist in three forms: black, white, and gray. Black is able to harm a person, white protects him from evil forces and gray is a mixture of black and white. By the way, in their pure form, various forms of magic are extremely rare.

Every primitive tribe had its "internal" shaman who, by only known methods, healed illnesses, summoned the rain, as well as successful hunting and victory over the enemy tribe, and even punished the magical rites of the soukmen, who had transgressed the laws of their society. The mystery of magic was passed on by the chosen one as an inheritance.

Perhaps it was only after the emergence of Christianity that magic began to be considered a "devilish" activity because it disrupted the will of the divine forces. It was thought that a man who had resorted to her help would summon the Devil as a helper. This was the impetus for the beginning of the so-called witch hunt.

Their VIEW is poisonous

Today, the original meaning of the term witch, which denotes the one he knows, which he knows, is practically lost. But in this case we are talking not only about the magical sequence, ie the transmission of values, but about the whole system of cultural traditions.

The most detailed testimony on this subject can be drawn from the treatise The Hammer of Witches, written by the Inquisitors Jakob Sprenger and Heinrich Institoris, published in 1486. ​​It states: their gaze is poisonous and devastating… By the will of God or for some other hidden reason, the devil's wrath takes part here if the women have made a covenant with him. ”

According to tradition, witches met regularly on the Sabbath. Small groups organized local witchcraft parties, while large groups took place on February 2, June 23, August 21, and December 21. The most significant were Walpurgis Night (April 30) and the night from October 31 to November 1 (Halloween).

All esteemed witches were thought to have had the ability to fly. This was made possible by the magical ointment they used on their bodies. By the way, the physician Johann Vayer from the Netherlands (16th century) assumed that thanks to this ointment, the witches only thought they were flying. This means that this composition, made essentially of herbs, was actually a strong narcotic.

As is well known, in the Middle Ages, witches and wizards awaited death at the border. At best, it was hanging or drowning. The most famous city of witches was Salem (Massachusetts). In 1692, more than forty women accused of magic were executed here. There are now several museums in the city with the following themes: The Witch Museum, the Witch Dungeon Museum and the Peabody Essex Museum.

The latter contains about five hundred original documents from witch trials, as well as terrible torture instruments. You can visit the house of Judge Jonathan Corwin, known as the House of Witches, Old Burying Point Cemetery, where the executed witches were buried, but it is also possible to buy one of the many round trips around the enchanted places. And there are not many people who want to get nervous.

Shamans between the dead and the living

We can include in the field of magic any activity associated with magic, divination, witchcraft, etc. But traditionally, magicians are called "specialists" of a higher level. People think that in addition to the art of performing miracles, they also have a certain spiritual training, they are able to get into various dimensions and manipulate their reality to one degree or another. Among these people are also shamans.

The word shaman in even language means expert, That is the one who knows. They call him Altai kam, in Kazakhstan and Kyrgyzstan bakši, in Buryatia and Mongolia bee. Shamans are strange people who can talk to ghosts.

The shaman usually uses magical formulas and rituals that release bioenergetic powers. With their help, he can cure the disease or, conversely, send it to people uncomfortable for him, separate his soul from his body and send it to the world of the dead, thus maintaining a connection between living people and their ancestors. Because of the magical ritual, the shaman wears special clothing.

In the Siberian peoples it is usually a long shirt made of deer or seal skin, in some other tribes it is linen. He wears it over his pants and puts on his high boots. Various attributes, such as animal and human figures, copper and iron plates, bells, leather or moss ribbons, ribbons or mallets, which they attach to their clothing, have a symbolic meaning. They also seem to have their own soul, which also moves into the shaman during the ceremony.

Their unchangeable attribute is a drum or a tambourine, and rhythmic blows allow them to enter the trance. Eskimos and South American Indians use a rattle instead of a drum. The researcher of bioenergetic phenomena academician V. Kaznaceev and his collaborators have dealt with the phenomenon of shamanism as a unique physical phenomenon.

The point is that an inseparable part of shamanic practice is kalmania, which is a ritual during which a shaman is put into a trance. The researchers concluded that there is a special information wave environment with which the shaman comes into contact during kalmania. The study of shamanism can become an important step towards sensational revelations in physics and medicine.

Most researchers are still inclined to believe that any magical activity is associated with the innate or developed ability of one person or another to perceive the bio-energy-information field (aura) of other people, objects, and the environment. Not for nothing does the current word sensibil literally mean extremely sensitive.

The sixth sense is often associated with clairvoyance, ie the ability to obtain information about the past and the future, but also about hidden events. Therefore, techniques for entering altered states of consciousness have long been used. For example, in ancient Egypt, priests hypnotized little boys who were slaves for this purpose, and in ancient Greece prophets, or soothsayers, were popular in whom deities seemed to be embodied so that the will of God could be revealed.

Today, these phenomena have become the subject of very serious scientific research. In the early XNUMXs, the US government turned to Harold Puthoff, a well-known physicist at the Stanford Research Institute. With his help, a research plan in the field of extrasensory perception was developed.

Puthoff and his assistant Russel Targ invited Ingo Swann, an artist who was also an important medium, to collaborate. As part of the test, he was suggested to look at Jupiter with his inner vision and then transfer the vision to paper. Swann drew rings around the planet, though nothing was known about them at the time. It was not until a little later that the Pioneer and Pioneer 10 satellites were launched into orbit in Jupiter.

When the photographs they created were compared with Swann's drawing, it turned out that the planet was indeed surrounded by gas rings. In 1981, Ingo Swann, together with a group of sensibles, developed a method of targeted distance clairvoyance, which was called the Coordination of Distance Observation.

In 1995, they broadcast a documentary on television, using materials that had already been declassified at the time from the group's archives. It said that sensibles not only demonstrated their powers in experiments, but were able to develop them in those who were interested.

This proves that a great deal of people are endowed with so-called parapsychic abilities, sometimes also called paraders, from birth.

If you feel tired and often irritated, try harmonization with this shungite pyramid. As the pyramid acts from the base upwards, we recommend placing it on the ground or in front of a source of negative radiation (television, computer, etc.). Its range of action is about 5 m.

It is not necessary to charge the pyramid in any special way, just rinse it once a month and let it charge in the fresh air for an hour. 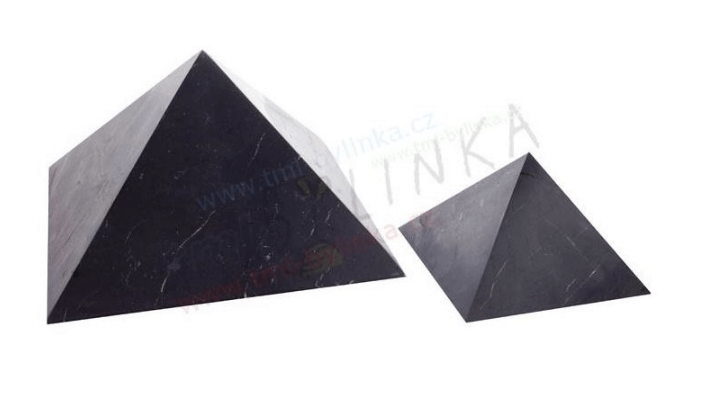