Explosion of the cosmic body before 3700 flights!

According to archaeologists who found evidence of a cosmic explosion, a meteor or comet exploded in roughly 3700 flights in the Middle East. There is a theory that this explosion has extirpated humanity in the whole area called Middle Ghor, north of the Dead Sea.

Scientists at the annual meeting of American Schools of Oriental Research (14 - 17.11.2018) described the situation as follows:

"The blast immediately destroyed everything in the 500 square mileage. It smashed not only cities, but also fertile soil, and in the impact wave covered Middle Ghor glowing brine from an anhydride mixture of salts and Dead Sea sulfates. Based on archaeological evidence, it took at least 600 years to recover enough damage and soil pollution and restore the Eastern Middle East civilization. "

One of the ruined places was Tall el-Hammam, an ancient city that spanned 36 hectares.

Among the evidence that scientists have discovered the explosion, 3700 is the old ceramics from Tall el-Hammam, an unusual appearance. The surface of the ceramics was vitrified (changed to glass). The temperature was so high that parts of the zircon in the ceramics changed into gas - that required a temperature of more than 4000 degrees Celsius, said Phillip Silvia, field archaeologist and site manager of Tall el-Hammam. Strong heat did not last long enough to burn all ceramics, parts of ceramics beneath the surface were relatively undamaged. 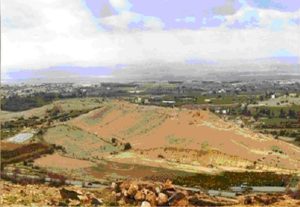 As Silvia has said, the only natural event that can cause such unusual damage is an overhead explosion of the cosmic body - something that occasionally happened during the history of the Earth, such as the 1908 explosion at Tunguska in Siberia. Archaeological excavations and surveys in other cities in the affected area also indicate the sudden destruction of life roughly before 3700, Silvia confirmed. No craters have been found yet. It is not clear if the culprit was a meteor or a comet that exploded above the ground.

The fact that only 500 square kilometers of land was destroyed suggests that the explosion occurred at a low altitude, probably no more than 3 km above ground, Silvia said. For comparison, the Tungus explosion severely damaged 2150 square kilometers of soil. The results are preliminary and research is ongoing, Silvia stressed. The team includes researchers from Trinity Southwest University, North Arizona University, DePaul University, Elizabeth City State University, New Mexico Tech, and the Comet Research Group.

6 comments on "Explosion of the cosmic body before 3700 flights!"