Is the atmosphere on the moon?

Review movie Sirius. We still have a Public Hearing.

The mysterious mountain of laying eggs that spews stone eggs

Mount Gandang, a mountain in southwestern China, has an interesting phenomenon that geologists, researchers and locals have been observing for decades. Located in Guizhou Province, the rocky walls of the foothills include what the locals refer to as "Chan Dan Ya", Mandarin's "egg-laying reef," due to its ability to "lay" stone "eggs." “Every 30 years. But where do they come from?

The egg-laying mountain cliff is approximately six meters (20 feet) wide and 20 meters (65 feet) long, which is Mountains relatively little. About every 30 years, a small cliff "lays" stone eggs on its side. As soon as the stone egg is released from the cliff, it falls to the ground, where the first local finds it, who is lucky to come across it.

This phenomenon of laying stone eggs has been observed for hundreds of years. Locals in the region have heard stories of the egg-laying mountain since childhood, and most of them visit it and try to find the dropped stone eggs as soon as they grow up. Of the stone eggs that have been obtained, the size of each ranges between 20 to 60 cm (7 to 24 inches). They have a dark blue hue and are almost perfectly smooth, making them able to reflect sunlight at certain angles once cleaned and polished. It was even found that the largest of The stones weigh over 600 pounds (272 kg)! 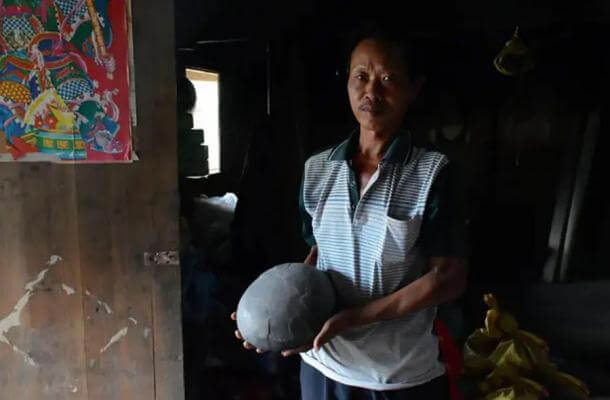 A local resident with one of the stone eggs from the egg-laying mountain in China. (AsiaWire)

Rocks of Happiness Born from the mountain laying eggs

The nearest village of Chan Dan Ya is Gulu Village, an old area in the autonomous region of Sandu Shui, where 250 Shui live, which is more than 000% Chinese Shui population. The Shui people are one of China's 56 officially recognized ethnic groups and have lived in the area before Han dynasty . Although the region itself is large, the village of Gulu is actually quite small and has only a few dozen families who call it home.

The name Shui can be translated into the word "water", which is an appropriate expression given their history of life by the water. Whether rivers or streams, Shui people can live next to them. At some point in history, several Shui communities have been forced to migrate to the mountains, where they currently remain while still retaining their love of water. Their traditions, folklore and other beliefs revolve around the concept of water. Most of their clothes are dyed shades of blue to match the color of the water. In fact, the Shui language was also developed with regard to water, because their language has ten different words that mean "fish".

Since the discovery of their local egg-laying mountain, locals have reported that more than 100 eggs have been found at the base of the cliff. There are currently about 70 of them in the village and they are divided among families according to who found them first. According to them, the rest is either sold or stolen. The Shui people believe that stone eggs born from a mountain-laying egg lay luck and happiness, and sometimes the stones even worship. They can be found in almost every house in the village and are highly respected by those who collect them, as they are supposed to bring prosperity and security to their people, animals and homes. 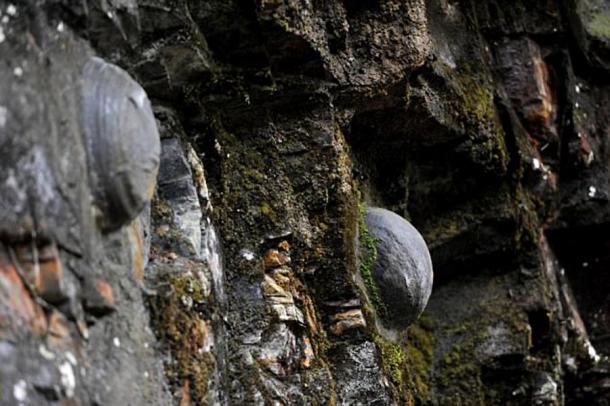 Geologists still do not fully understand why these stone eggs appear from the Chan Dan Ya cliff in China.

Formation of stone eggs on the egg-laying mountain

The origin of these mysterious stone eggs is still being studied. Based on current research, it is estimated that these eggs and the surrounding rock in this area originated in the Cambrian period about 500 million years ago. The Cambrian period was part of the Paleozoic era and is known for the "Cambrian explosion" - a period in which, according to fossil records, most of the major animal groups on Earth appeared and diversified. Geologists believe that the area was once underwater, which may have contributed to the formation of these egg-shaped rocks over time.

It is believed that due to the heat and compression on these stone eggs over the last 500 million years they are now considered metamorphic rocks. Metamorphic rocks are formed from existing igneous or sedimentary rocks that are exposed to intense heat and underground pressure for extended periods of time.

Professor Xu Ronghua of the Institute of Geology and Geophysics at the Chinese Academy of Sciences claims that the stone eggs are made of silica, which was very present in the area during the Cambrian period. If true, he claims that stones ovoid shapes make sense - because the sphere has a small surface area compared to other shapes, the silica particles would stick to the sphere shape in the water before being compressed into metamorphic ones. rocks .

Being underwater alone would also contribute to the roundness and smoothness of the stones. As the stones spread down the ocean floor due to the surrounding currents and animals, they wear into smoother and rounder shapes. The same concept applies to the production of ocean glass or domestic stone glasses.

Silica is present in many rocks, some rocks they have higher amounts than others. Fibrous silica varieties are specifically called chalcedony. Examples of chalcedony include agate, bloodstone and onyx. Quartz and moganite are also made of silica, but each has a different physical crystal structure than each of these other examples. It is not entirely clear why stone eggs are black rather than clear, milky or pastel like other silicon stones, but scientists are actively trying to uncover another secret of the composition of these mysterious stone eggs.

However, the area around the cliff outside the eggs is different. The cliff itself is not made of metamorphic rock. Instead, the surrounding rock is made of calcareous rock, which is considered a sedimentary rock. Sedimentary rocks can be found closer to the earth's surface and are made from compressed sediments such as sand, soil or existing smaller pieces of rock. Examples of sedimentary rocks include limestone, sandstone and shale. With these sediments surrounding the stone eggs, it is possible that they have helped compress and separate them over the last 500 million years. 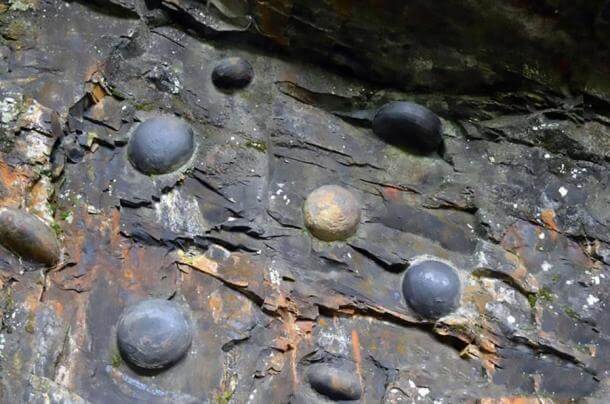 Stone eggs emerging from the cliff of Chan Dan Ya. (AsiaWire)

Where do they come from?

Although stone eggs may appear to form over 30 years and be "born" on a cliff, this is not the case. As has already been said, these stone eggs are thought to have existed for almost 500 million years. Over time, Chan Dan Ya's cliff has worn due to weathering and erosion. Changes in temperature and exposure to wind, water, ice, gravity, people and animals can wear out over time on even the largest rocks - including mountains.

Due to the fact that the composition of the stone eggs and the surrounding reef differ from each other, it is believed that the surrounding reef simply wears out faster than the stone eggs themselves. This is because calcareous rock decomposes faster than metamorphic rock. Lime rock is primarily made of calcium oxide, carbon dioxide and magnesium oxide.

They may also contain trace amounts of aluminum, iron, silicon and water. Due to its composition, the surrounding calcareous rock decomposes faster and over time reveals stone eggs of a different composition. Because metamorphic stone eggs do not disintegrate with the surrounding cliff, they fall out of the side as they wear out.

Gulu residents estimate that it takes about 30 years for each stone egg to be "laid" by a mountain from its first appearance on a cliff until it falls to the ground. The stone egg that is just emerging may be 30 years old before the cliff erodes enough to fall, but the stone egg, which is already partially outside, may have only 10 to 20 years left. Since all the stone eggs are in different positions on the cliff, the egg could theoretically fall at any time for another lucky one to find one.

As the mountain continues to erode, stone eggs could begin to emerge from the routes often traveled by local Shui people and other tourists to the region. If this happens, traveling on a trail or on a horse may prove more difficult and measures may need to be taken to physically remove or wear protruding eggs. 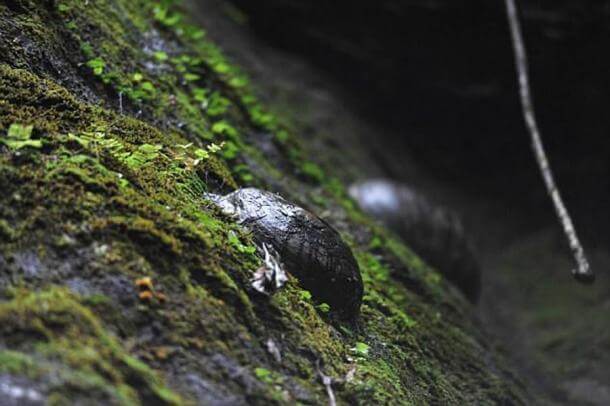 Stone eggs emerging from the egg-laying mountain in China. (AsiaWire)

The future of the egg-laying mountain

What comes to the famous egg-laying mountain? As the mountain slopes wear out over time, more stone eggs emerge from the cliff and fall to the ground. In addition, eggs can also begin to protrude on mountain tops as they erode from walking, as already mentioned. Geologists not sure how many eggs remained in the mountain, but theoretically it could be throughout the mountain if the area contained enough silica during the Cambrian period. Eventually, no one will know until the mountain runs out of stone eggs - if at all.

Over the next few thousand years, the mountain will continue to erode into the soil, leaving these eggs behind. If the eggs are no longer collected, they will remain on the ground, where they will also disintegrate and become a sediment, which will eventually form new sedimentary rocks. This is the rock cycle we all learned about in elementary school. However, without exposure to weather conditions such as soil, wind, water and ice, stone eggs could be preserved by humans for much longer if careful collection continues.

Believe it or not, this particular cliff at the foot of Chan Dan Ya is not the only area that "lays eggs". In other less visited areas of the mountain, eggs are also exposed and released, further indicating that the whole mountain is full of them. If true, locals could see more of these unique rocks for many generations.

Families in other nearby areas may also begin collecting these eggs as soon as more appear, and use them for trade, tourism, or religious purposes. Those who live on the other side of the mountain and have never witnessed this egg-laying phenomenon can begin to see it for themselves.

Although Mount Gandang was the first place where these stone eggs were found, it is possible that there may be other places in unexplored mountain areas. It is also possible that future mountains may contain more stone eggs. At present, our oceans contain 30 ppb (parts per billion) of silica, and the earth's crust is made up of 59% silica.

With so much silicon still present in both the earth and the oceans, it is possible that future mountains could contain newly produced eggs in millions of years. Although we personally will not be close to seeing these Mountains laying eggs as they lay eggs, maybe those who see it will be as fascinated as we are.