Mysterious USO on stage (2.): Red flames off the coast

USO. Unidentified Submerged Objects. We're about to talk about them...

At the beginning of my second work, I must mention the famous Bermuda Triangle. This area, sometimes called Sky Trap, is much known for fascinating phenomena and strange disappearances. Most of this triangle was celebrated by Charles Berlitz's book - The Bermuda Triangle. It is clear that not all mysterious events also belong to the area of ​​mysteries - a topic that interests you and me. But there is still a significant number of cases in the "unsolved" box.

Maybe a lot of you have heard about the second location on the opposite side of the globe. Yes, I mean the Devil's Sea east of Japan. I wonder if I have to deal with these, I can say, with notorious anomalies. But back to USO. So we will avoid those sites so far and look at other mysteries of the "undersea UFO".

USO in the Atlantic Ocean

Not curiosity, but horror awoke the mysterious phenomenon of husband Jean and Lloyd Wingfield. They sailed like this from Venezuela to the Canary Islands when about 30km from the coast of England were seen in the middle of the sea an outbreak of red flames. Their aquasport yacht watched the red fire from the yellow tubes. Do not be surprised that your husbands felt very strange. There are certainly not many people who have noticed a strange phenomenon in the Atlantic Ocean or elsewhere in the salt element ...

In 1974, a major US Navy mission took place in Antarctica. The ice anabase under the name Deep Freeze was attended by the Brazilian hydrologist Dr. Favella. One day, in close proximity to the southern polar circle, he watched astoundingly break the ice layer with an unknown silvery-colored object. He, in a moment, took a dizzying speed and disappeared into the head of the turbulent Brazilian hydrologist and his colleagues. 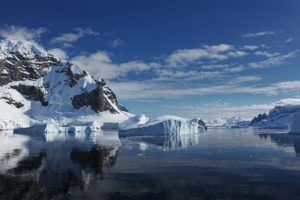 USO in the Mediterranean Sea

And what a mysterious spectacle from the Mediterranean, which is considered to be one of the best searched salty waters of the world. In 1976, Italian fishermen witnessed the emergence of an unknown "saucer" building from the depths of the salt element between Europe and Africa (Asia).

Maybe you too would not believe the claims of Italian fish hunters from Ascoli Piscent - but passengers and crew members of the famed Queen Elizabeth cruise ship sailed across the Atlantic watching USO in the shape of a "big sink" as well! The testimony of such a number of people described in the British newspaper as "a silent ghost that has disappeared into the sea" can not just be pushed aside and seduced it for example crowd psychosis.

That American sailors from Tacoma Hairbour would suffer from crowd psychosis? US NAVY officers watched near Maury Island (Puget Bay, Washington). 1.6.1947 drops one of the six shining discs flying in perfect formation at about 100 above sea level. But - it was a fall due to an accident or deliberate dive into salt water. The detonating detonation rather suggests the first variant ...

Other examples of USO

I'll choose four more cases from my stack of mysteries and secrets. 11. April 1965 observed two men in the Australian state of Victoria from the cliff at Wonthaggi about fifteen minutes of two exotic vehicles that emerged approximately 800m from the coast. The armed Australian Navy learned that there was no submarine in the area.

6. 1965 piloted pilot C. Adams along with the cameraman island of Island north east of Brisbane. At sea on the island, they saw a fleet of five spindle, unknown, underwater vessels. Two of them were about 30 long. Near the two longest of the formation maneuvered the remaining three objects.

12. January 1965 flew the DC-3 at 150m over Kaipara Port. The captain of the airplane saw beneath him a "whale on the shallows". But she could recognize herself in closer look metal leather. The length of the non-naval vessel was estimated at 30, and was about 10 deep. The Navy later said it could not be a submarine because underwater craft can not pass through at all ...

13. November 1965 was spotted by two langoust hunters from Invercargill (New Zealand), as at Rugget Island at a distance of about 300, a tower shaped tower to which a strange cube was attached. But all this, in a few seconds, he disappeared back under the boiling water into the depths ...

There is no doubt that these cases can not be placed in the box unknown natural processes or in the box mass psychosis or in a drawer named unreliable witnesses etc.

It is worth noting even the absurd arguments of the famous scientists - I recall in the daily press the recently published testimony of the captain of one aircraft, who saw large red circles in the sea above Kamchatka. Explanation of scientists? It was supposed to be submarine volcanoes ... And for 99% of people this event lost the mystery mark. But one courageous volcanologist has said that volcanoes are naturally his field, he knows the area in question and especially under the sea level in that area no undersea volcanoes they are not!

The mysterious USO on the scene

Mysterious USO on stage (1.): Panic on a steamboat