Without sand, concrete cannot be made. To meet the demand for the construction boom, sand from the bottom of the rivers is mined across Africa without anyone thinking what it means to the rivers and people whose lives depend on them.

The word sand brings to mind happy memories of holidays and holidays. To build sand castles, to watch nervous crabs, how to smell him at sea, to dig up giant holes, hide them and scare unsuspecting relatives.

Sand, owing to its soft beaches, represents hundreds of thousands of years of weathering that has created millions and millions of shiny, tiny - yet seemingly insignificant particles. The amount of sand seems endless. And yet the world is running out of supplies, the BBC notes.

When we think about it, it's obvious. All major building materials - concrete, bricks, glass - need sand for production. The soaring population and the need for building development have made sand the second most used natural commodity on the planet by water. Billions and billions of tons are consumed worldwide. 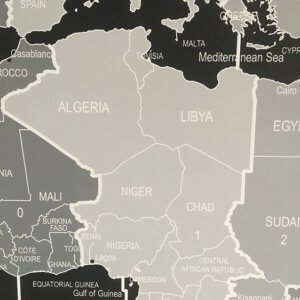 It is such a huge amount that, according to UN estimates, worldwide 2012 sand consumption alone would be enough to build a high and wide 27 concrete wall around the equator. And we don't have to go to the beach to be surrounded by sand. Our cities are basically giant sand castles disguised in concrete.

Sand from the bottom of rivers and oceans

Sand used in construction comes mainly from the rivers and oceans. The desert sand is too fine for these mixtures. Huge construction projects, for example, have quickly depleted the sea sand reserves in Dubai, and so, although it is a sand-built city, it now imports this commodity from Australia. Yes, it is irony. Sand has become such a valuable commodity that Arabs must buy it.

The huge demand for sand can look innocent, yet it deprives people of their livelihoods, destroys ecosystems and causes death. In India, a black market for illegally mined sand has emerged, run by violent "sand gangs".

In China, the largest freshwater lake, Phoyang, dries due to sand mining. Hundreds of locals are dependent on the lake where they fish, and millions of migratory birds who stop there year after year are essential.

In Kenya, many poor communities have prepared river bed mining for access to water. It is believed that over the next 40 years, the population of Kenya will double. Therefore, major infrastructure expansion projects such as the new Kenyan standard gauge railway are needed. But this requires millions of tons of sand, which has been over-exploited in Kenya for years.

Sand is needed for survival

The consequences in the Makueni region are particularly acute. The temperature during the year rises to 35 degrees Celsius. Sandy rivers are meandering through arid land, and during the dry season, water seeps through the sand and hides underground. Almost a million local residents have traditionally been used to digging holes in the sand during the dry season and extracting water to help them survive.

But when the sand is extracted from the rivers, only a rocky bottom remains, through which the water flows sharply during the rainy season and none is deposited in the sand during the dry season. Locals call such rivers "dead." For them, sand is something quite different from new construction or a beach holiday. For them, sand can mean the difference between whether they have something to eat or not, and between whether they have water to drink or not.